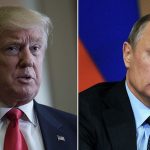 “The two immediate threats are the proliferation of nuclear, chemical weapons. We see Iran and North Korea as the sort of two leading-edge threats in that regard. And then, second, the continuing threat of radical Islamic terrorism, with ISIS, al-Qaeda, the Taliban in Afghanistan, all really threatening us in palpable ways today.”

“We need to have a long-term strategy to keep Russia in check in both Eastern and Central Europe and in the Middle East.”

“The relationship with China, I think, will be the dominant international issue for the United States for the rest of this century, and we’re not doing well right now.”