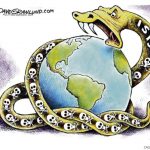 This article appeared in the Pittsburgh Tribune Review on April 9, 2017. Click here to view the original article.

Nuclear weapons in the hands of terrorists and their state sponsors may not be the only threat from the Middle East. But in the coming years, it definitely ranks first on the list.

Thus, as American decision-makers focus on destroying ISIS in Syria and Iraq, they should also be shaping how that war ends to prevent nuclear Iran from benefiting the most.

The Pentagon is reviewing options to defeat ISIS as rapidly as possible, thus preventing the radical Islamists from recruiting, training and deploying more terrorists throughout the West. This is all to the good, alleviating the dangers to innocent civilians far from the Middle East conflict.

But the Pentagon and the White House should also emphasize another critical strategic fact inherent in any complex, multiparty conflict: Completely eliminating one combatant invariably benefits all those remaining. Certainly, this current war is as complex and volatile as any America has ever seen. Nonetheless, the United States must defeat ISIS through a strategy that maximizes the postwar position of its allies rather than Iran’s. Conversely, Iran and its regional surrogates (Iraq’s current regime, Bashar al-Assad’s Syria and Lebanon’s Hezbollah terrorists) should find their relative strength increased as little as possible.

However unpleasant it may be to face the reality of one conflict rapidly succeeding another, our anti-ISIS strategy must recognize Iran’s long-term scenario, where its coalition strives for regional hegemony over Israel and Arab states friendly to America. Iran remains the most prominent state sponsor of terrorism, first designated by Ronald Reagan in 1984 and holding that dubious designation ever since. It is the world’s central banker for international terrorism, funding and arming Shia terrorists like Hezbollah and Sunni terrorists like Hamas in the Gaza Strip.

It is therefore troubling when Trump administration spokesmen say that leaving Assad in power in Damascus is now a regional reality we must accept. Instead, as we pursue the top priority of destroying ISIS, we should avoid strengthening either Assad’s Iran-backed regime or Hezbollah, which dominates Lebanon and threatens Israel.

In both Iraq and Syria, many Sunnis supported ISIS not because of its extremist ideology but because they opposed, respectively, the Shia-dominated government in Baghdad or Assad’s Alawite regime in Damascus. Accordingly, the last thing we want is a Tehran-dominated Iraqi government increasing its territorial control over Sunni lands in Western Iraq recaptured from ISIS.

We should substantially reverse President Obama’s support to Iraq’s government, as in the ongoing battle for Mosul, which is slowly being obliterated. Baghdad’s forces, especially its Shia militias, are continuing to commit atrocities against the Sunnis and Christians they are supposedly liberating from ISIS, laying the basis for future conflicts.

Divisions among the Kurds are equally complicated; some are reliable allies in Iraq, but others are mortal enemies of Turkey, still a NATO ally, albeit a problematic one.

Tehran’s objective is clear: an arc of influence from Iran through Iraq and Syria, anchored in Lebanon by Hezbollah. From this geographic base, terrorist attacks against Israel, Jordan and the Arabian Peninsula’s oil-producing monarchies, conventional warfare and ultimately even nuclear weapons are entirely feasible.

There should be little doubt that Iran, whose path to deliverable nuclear weapons was paved by Obama’s 2015 nuclear agreement, would readily use or threaten to use those weapons, or provide them to terrorists, to achieve regional hegemony. Iran’s continuing menace as a terrorist state is inextricably linked to its nuclear program, and that is one reason why Obama’s nuclear deal is so inadvisable.

It also explains why meaningful anti-terrorism cooperation with Russia is impossible as long as Russia aligns itself with the ayatollahs.

The grim reality is that Russia and Iran are functional allies in this and probably future Middle East wars, less interested today in destroying ISIS than in consolidating and expanding their positions in preparation for the next conflict.

Russia stood by Assad even when his prospects looked bleakest during Syria’s bloody post-2011 civil war. Moscow was determined not only to maintain its Tartus naval facility in Syria, but to expand its reach, regaining levels of influence unmatched since Anwar Sadat expelled Soviet military advisers in the 1970s.

By unequivocally calling for ISIS’s immediate defeat, candidate Trump marked victory in this critical aspect of the war on terror a principal goal of his administration, distinguishing himself clearly from Hillary Clinton and Barack Obama. Now, to re-establish real international peace and security, we should achieve victory over ISIS in ways that protect America and its friends against the continuing nuclear and terrorist threats from Tehran’s radical Islamist regime.

John Bolton, a senior fellow at the American Enterprise Institute, was the U.S. permanent representative to the United Nations and, previously, the undersecretary of State for arms control and international security.