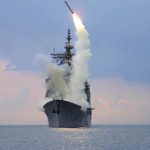 This article appeared in The Times (UK) on April 9, 2017. Click here to view the original article.

The Obama era in American foreign policy ended in Syria in the early hours there on April 7. Donald Trump’s prompt, calibrated and devastating assault on the airbase from which al-Assad’s dictatorship launched planes loaded with chemical weapons to murder innocent civilians was a fire bell in the night for all of America’s present and potential adversaries.

Whether Syria (and perhaps Russia) thought they would get away with the renewed use of chemical weapons based on media perceptions of Trump’s national security proclivities, we may never know. But his response has demonstrated that Trump will do what he believes is necessary when America’s security is threatened.

Vladimir Putin and perhaps even US Democrats will now realise there is no puppet of Moscow in the White House.

Iran and North Korea should take due note of the effects of 59 well-aimed Tomahawk land-attack cruise missiles (“T-LAMs” in our jargon: they should become familiar with it).

No Hollywood scriptwriter could have imagined a scenario where Trump orders the attack and then sits down to dinner with Xi Jinping, the Chinese president, and their wives. Welcome to the American way of war.
There is no doubt that Trump’s limited and precise attack was fully justified. Syria was a party to the chemical weapons convention, as is the United States. Whenever any party to a treaty that forbids the use or proliferation of weapons of mass destruction breaches its commitments, that constitutes a threat to American national security.

Critics in Washington who argue that the president needs congressional authorisation should study their constitutional history.

In the immediate aftermath of the strike, many will ask only what is next for Syria. In fact, the geostrategic question is far broader, encompassing nearly the entire Middle East.

First, unlike Barack Obama, Trump has no concern that his actions in Syria, especially those directed against Assad, will adversely affect the nuclear deal with Iran. Trump’s criticisms of that deal are abundantly clear.

Second, and perhaps even more important now, we are rapidly approaching the point of eliminating the Isis “caliphate” in what used to be Syria and Iraq. It behoves Washington and all other concerned parties to think hard about what will replace the vacuum created when Isis’s territory is liberated.

It is especially important to structure the Isis defeat to minimise the upside advantages for the Iran-led coalition, which includes the pro-Iran Baghdad regime, Assad’s Syria and Lebanon’s Hezbollah terrorists.

Russia is allied with this coalition, openly so in the case of Syria where Russia has a naval base at Tartus and a new airbase at Latakia.

We should not think only in terms of an either/or outcome in Syria: either Assad goes or Assad stays. There may be other outcomes, including partitioning Syria (and Iraq), leaving Assad in control only of what has been called “the Alawite enclave”.

Complex, seemingly intractable issues lie ahead, as the post-First World War Middle East order collapses, but they cannot be ignored under the complacent assumption that Syria and Iraq will simply re-emerge as the states they were before the ill-named Arab Spring and the equally ill-fated US decision to withdraw its forces from Iraq, both in 2011.

The Kurds are already de facto independent from Iraq and no one will force them back into Iraq against their will. Sunni Arabs will never happily submit to a government in Baghdad dominated by a Shi’ite population outnumbering them three to one and dominated by Tehran.

Similarly, Syrian Sunnis will not accept Assad as their ruler again. To believe otherwise is to ignore that such outcomes will simply precipitate further conflict and more extremism.

The main issue is to keep the aspiring nuclear weapons state Iran, still the central banker of international terrorism, from emerging in an even more menacing regional position.

Weakening Assad’s forces — and reminding Tehran implicitly of what Washington did to Saddam Hussein in 2003 — can only improve the regional prospects for stability. The lesson is that American strength is a force for international peace and security and American weakness an incentive for the world’s predators.

April 6, the day in US time when Trump ordered the strike against Syria, marked the 100th anniversary of America’s entry into the First World War.

We never asked for global responsibilities, but when it mattered we acted and we acted justly. Let America’s critics around the world think on that. I am particularly proud to be an American today.

John Bolton was the American ambassador to the UN, 2005-6