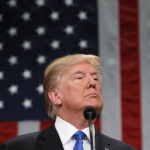 President Trump’s first State of the Union address was not heavy on national security issues. It did, however, make one critical point: In reviewing the international achievements of his first year in office, Trump was abundantly clear that the Obama era is over. Primarily retrospective assessments like Trump’s are perfectly legitimate for a president finishing his initial year, especially given what his policies are replacing.

Gone was President Obama’s self-congratulatory moral posturing, replaced by a concrete list of accomplishments that will inevitably increase the power of America’s presence in the world. Trump’s policy is not only not isolationist — as many of his opponents (and a few misguided supporters) contend — his pursuit of Ronald Reagan’s “peace through strength” approach actually demonstrates that Obama’s detached, ethereal retreat from American assertiveness internationally amounted to the real isolationism.

Most importantly, Trump again committed to palpably more robust military budgets and an end to the budget-sequester mechanism, the worst political mistake made by Republicans in Congress in living memory. Sequestration procedures were liberal dreams come true, forcing wasteful increases in domestic programs in order to obtain critical military funding. The sooner this whole embarrassing exercise is behind us, the better.

As Secretary of Defense James Mattis frequently points out, harking back to Jeane Kirkpatrick’s famous comment, there cannot be an adequate American foreign policy without an adequate defense policy.

Trump chose to single out the need “to modernize and rebuild our nuclear arsenal,” the bedrock of America’s deterrence capabilities. Indeed, Trump went on, quite rightly, to cast doubt on the “Global Zero” notion of actively working to eliminate all nuclear weapons. For many of those who pursue “Global Zero,” the real target is not rogue states like Iran or North Korea, or strategic threats like Russia or China, but the United States itself. Trump basically said in response, “When the lions lie down with the lambs, call me.” Just so.

I wish the president had also stressed the profound need to rapidly scale up our national missile defense capabilities, a program that was all but eviscerated during the Obama administration. Indeed, we must devote far more attention to capabilities beyond the original Bush program, which focused on addressing the relatively limited threats of the rogue states, which might have the capability to launch handfuls rather than hundreds of ballistic missiles at American targets. It is past time to return to Reagan’s original vision of “strategic defense,” so that the United States can have adequate defenses against Russia’s large, newly upgraded and modernized missile arsenals, and also against China’s rapidly increasing capabilities.

Increasing our defense capabilities is not just important: It is urgent. The global bills accrued because of failures by prior administrations are coming due on Trump’s watch, underlining the gravity of the international threats facing the United States. With immediate, continuing threats from international terrorism and nuclear proliferators like North Korea and Iran, plus strategic threats from Russia and China, America’s agenda is full to overflowing.

On radical Islamic terrorism, Trump could point to the military success against the ISIS caliphate and new rules of engagement for U.S. forces in Afghanistan, while recognizing that we remain at risk as long as this dangerous political ideology persists. There was no better manifestation of the president’s commitment to winning the “long war” than his unequivocal statement that our terrorist prison at Guantánamo Bay would remain open. Trump thereby emphatically rejected the Clinton and Obama administrations’ “law enforcement” paradigm for handling terrorism, and embraced the “war paradigm,” which brings into play a different mind set, different national powers and different legal authorities and constraints.

Trump was very clear that he regards the regimes controlling Iran and North Korea to be the basic problems, and that nuclear weapons in their hands were unacceptable, a formulation very close to George W. Bush’s admonition that we could not allow “the world’s most dangerous weapons” to fall into the hands of “the world’s most dangerous leaders.” Trump did not explicitly call for regime change in Tehran and Pyongyang, but he came close enough that fire bells should be ringing in the night in both Iran and North Korea. U.S. actions, and those of other like-minded countries, should now follow, to make it clear that the way to minimize the chances for the use of force against the rogue states’ nuclear programs is to get new regimes that renounce the existing programs, and quickly dismantle them.

Trump cited both Russia and China as “rivals … that challenge our interests, our economy and our values,” thereby giving the lie (yet again) to those who say he is somehow blind to the Russian threat. While the president’s comments on China focused primarily on economic and trade issues, there is no doubt he understands the strategic nature of the Chinese challenge as well.

In the days following this well-received State of the Union, Trump must now develop a comprehensive series of policies for dealing with the due bills now cascading across his desk. Most immediately, the administration must decide on what it is prepared to do to ensure that, as Trump said to the United Nations General Assembly in September, denuclearization is the only way forward for North Korea and Iran. Preventing nuclear-capable rogue states (not accepting them, as Obama’s national security adviser, Susan Rice, said she was prepared to do) is clearly the right outcome.

What Trump must reject, immediately, is what we have been doing for years, and which has manifestly failed. In the military context, Gian Gentile has described what he calls “a strategy of tactics,” which purports to be a strategy but is not one in fact. Under a nonproliferation “strategy of tactics,” we have aimlessly tried a little of this, then a little of that, hoping that something would work out. It hasn’t. And there is not time for persisting in this failed approach.

Understandably, Trump may not have wanted to address these complex and dangerous issues in what was already a longer-than-average State of the Union. Fair enough, but the hard analysis and planning, and the even harder decisions, are coming very soon.