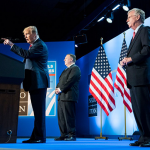 This article appeared in The New York Times on August 9, 2018. Click here to view the original article.

The work to preserve the North Atlantic Treaty Organization agreement, which is usually subject to intense 11th-hour negotiations, came just weeks after Mr. Trump refused to sign off on a communiqué from the June meeting of the Group of 7 in Canada.

The rushed machinations to get the policy done, as demanded by John R. Bolton, the national security adviser, have not been previously reported. Described by European diplomats and American officials, the efforts are a sign of the lengths to which the president’s top advisers will go to protect a key and longstanding international alliance from Mr. Trump’s unpredictable antipathy.