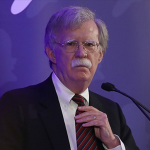 This article appeared at The Hudson Institute on September 17th, 2018. Click here to view the original article.

National Security Advisor John Bolton delivered a blockbuster speech at an event hosted by the Federalist Society last Monday, about how monumentally dumb and dangerous the International Criminal Court is for America.

The ICC is a multinational organization established by the Rome Statute. President Bill Clinton signed on to the statute in 2000 but never submitted the international treaty to the Senate. President George W. Bush then unsigned the treaty. President Barack Obama never signed the treaty, but he was friendly to it and cooperated with the ICC.

Bolton made the Trump administration’s position on the ICC ultra-clear in his speech:

It was a powerful rejection of the court. But that’s not all it rejected, and to singularly focus on the ICC misses larger principles that will surely guide the administration’s decisions about other international agreements. Three principles stood out.

The United States Is Not the Peer of Somalia

“The largely unspoken, but always central, aim of its most vigorous supporters was to constrain the United States,” Bolton said. “The objective was not limited to targeting individual US service members, but rather America’s senior political leadership, and its relentless determination to keep our country secure.”

Second, American sovereignty abroad means possessing the ability to act freely in the world, and we must ultimately remain governed by our own Constitution. Bolton said:

“The court in no way derives these powers from any grant of consent by non-parties to the Rome Statute. Instead, the ICC is an unprecedented effort to vest power in a supranational body without the consent of either nation-states or the individuals over which it purports to exercise jurisdiction. It certainly has no consent whatsoever from the United States. As Americans, we fully understand that consent of the governed is a prerequisite to true legal legitimacy, and we reject such a flagrant violation of our national sovereignty.”

Third, international law, treaties, and agreements, while not necessarily useless, are not intrinsically good, either. Nor are they ultimately responsible for restraining evil.

“The hard men of history are not deterred by fantasies of international law such as the ICC. The idea that faraway bureaucrats and robed judges would strike fear into the hearts of the likes of Saddam Hussein, Hitler, Stalin, and Gaddafi is preposterous, even cruel. Time and again, history has proven that the only deterrent to evil and atrocity is what Franklin Roosevelt once called ‘the righteous might’ of the United States and its allies — a power that, perversely, could be threatened by the ICC’s vague definition of aggression crimes.”

ICC Isn’t the Only Agreement Being Reconsidered

This brings us to another newsy decision by the United States that made fewer and smaller waves than the ICC speech this week. The United States refused to certify Russia’s advanced Tu-214ON surveillance plane for inspections under the Open Skies Treaty. The Open Skies Treaty came into force in 2003. Its purpose is to foster transparency and to help verify compliance of other arms control agreements.

The U.S. government hasn’t issued a statement in response to the reports that it has denied certification of Russia’s surveillance plane, but it should not be missed that Russia has a long history of violating treaties and has continually and recently violated the Open Skies Treaty. In a congressional hearing last June, Secretary of Defense James Mattis said he was very concerned about Russian compliance. “We will be meeting with State Department and National Security staff here in the very near future. There certainly appears to be violations of it [the Open Skies Treaty],” he said.

Mattis was rather cryptic in the open hearing, but just a few months before the hearing the State Department published a report that outlined some of Russia’s violations, including prohibiting certain overflights. If the United States has decided it will no longer look the other way when Russia so brazenly violates the treaty, this supposed refusal to certify the surveillance plane is just the beginning.

Countries like Russia should take Bolton’s speech seriously. This administration is taking stock of agreements and treaties that do not serve American interests first. If a treaty is not serving the interests of the American people today, even if it did at some point in the past, and if it is constraining the United States while adversaries violate it, there is a good chance that treaty is close to its expiration date. So be it.