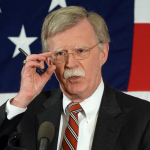 This article appeared in The Jewish Voice on September 26, 2018. Click here to view the original article.

National Security Adviser John Bolton on Tuesday issued a warning to Iran, telling the regime in a fiery speech in New York that there will be “hell to pay” if it continues on its current course.

“If you cross us, our allies, or our partners … yes, there will indeed be hell to pay,” said Bolton, who was quoted by Fox News, in a speech before the United Against Nuclear Iran (UANI) annual summit.

“According to the mullahs in Tehran, we are ‘the Great Satan,’ lord of the underworld, master of the raging inferno,” Bolton said. “So, I might imagine they would take me seriously when I assure them today: If you cross us, our allies, or our partners; if you harm our citizens; if you continue to lie, cheat and deceive, yes, there will indeed be hell to pay.”

“The ayatollahs have a choice to make. We have laid out a path toward a bright and prosperous future for all of Iran, one that is worthy of the Iranian people, who have long suffered under the regime’s tyrannical rule,” added Bolton.

Iran, he continued, “brazenly supports the criminal Assad regime in Syria” and was “complicit in Assad’s chemical weapons attacks on his own people.” He also called Iran the world’s “worst kidnapper of US citizens.”

Bolton also dismissed the Obama-era nuclear deal with Iran, saying it was “the worst diplomatic debacle in American history.”

President Donald Trump withdrew from the Iran deal in May. Recently, the President signed an executive order officially reinstating US sanctions against Iran.

The deal contained numerous provisions — including “weasel words,” Bolton said Tuesday — that White House officials found insufficient, such as limited inspection mechanisms to ensure Iran’s compliance with the deal, as well as sunset provisions that would lift various restrictions on Iran’s nuclear program in as little as 10 years.

The deal “did nothing to address the regime’s destabilizing activities or its ballistic missile development and proliferation. Worst of all, the deal failed in its fundamental objective: permanently denying Iran all paths to a nuclear bomb,” continued Bolton.

“The United States is not naïve,” he stressed. “We will not be duped, cheated, or intimidated again. The days of impunity for Tehran and its enablers are over. The murderous regime and its supporters will face significant consequences if they do not change their behavior. Let my message today be clear: We are watching, and we will come after you.”

Earlier on Tuesday, Trump addressed the UN General Assembly in New York City and slammed the Iranian regime, noting its leaders “sow chaos, death, and destruction” and “do not respect the sovereign rights of nations.”

“We cannot allow the world’s leading sponsor of terrorism to possess the planet’s most dangerous weapons. We cannot allow a regime that chants ‘Death to America,’ and that threatens Israel with annihilation, to possess the means to deliver a nuclear warhead to any city on Earth. Just can’t do it,” he said.