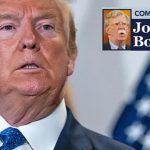 THE 2020 US election is over. Welcome to another uniquely American institution, the “transition” to the Biden Administration.

This article appeared in The Daily Express on November 15, 2020. Click here to view the original article.

We have perhaps the longest transition of any democracy, inherited from the Constitution’s first days, because of the geographic reach and limited transport capabilities among the 13 newly united states. Today, with presidential Inaugurations fixed for January 20, the transition is over a month shorter than originally. America’s most important presidential transition followed the 1800 election, when John Adams, the defeated Federalist incumbent, handed over to his Republican challenger, Thomas Jefferson.

In 1797, George Washington left office graciously, succeeded by Adams, his own Vice President. For Adams to accept defeat by the opposition party, however, was a big deal.

Jefferson said memorably in a brief inaugural address “we are all Republicans; we are all Federalists.”

He was sworn in by the new Chief Justice, John Marshall, nominated by Adams after his defeat, and confirmed by the last Federalist Senate majority after their defeat; so much for the supposed “inappropriateness” of nominating Amy Coney Barrett to the Supreme Court before the 2020 election.

Marshall was serving contemporaneously as Adams’ Secretary of State, and also served under Jefferson for approximately a month, a practice now unthinkable.

The 1800-01 transition was not free from rancour. Adams left town before Jefferson’s swearing-in, something we may also see on January 20.

But in their later years, Jefferson and Adams renewed their friendship from the time they crafted the Declaration of Independence.

They both died on July 4, 1826, the Declaration’s fiftieth anniversary. You can’t make it up.

Can anyone imagine Trump playing the roles of the Founding Fathers? Of course not. He will not leave graciously like Washington; so far, he has made Adams look like a man of noblesse oblige; and, unlike Jefferson, he is incapable of saying “we are all Republicans, we are all Democrats.”

So, what is likely in the two months before Joe Biden is sworn in?

At present, Trump has not only not conceded, he continues to insist the election was rigged.

He has unleashed Rudy Giuliani and other surrogates to “litigate” his legal challenges through news conferences and interviews, rather than in State and Federal courts.

Press reports indicate that lawyers previously recruited by the Trump campaign are now making themselves unavailable to join the legal efforts, and new recruits are scarce.

Judicial results for Trump so far are dismal, and little or no probative evidence or new legal arguments seem to be forthcoming.

The likely outcome is that Trump’s badly-faltering legal offensive will continue to collapse, perhaps ending with a whimper within the week. That doesn’t mean Trump will concede, gracefully or otherwise. Instead, he will proclaim “stab in the back” theories about why he lost: list the many “traitors” in his Administration and campaign who undercut him (I expect to be on that list, and in very good company indeed); and attack the always unpopular news media, political pollsters, and left-wing activists now poised to destroy the country.

Make no mistake, unless Republican leaders speak out against this fantasy, Trump will convince many people that the 2020 election was stolen.

Commentators left and right argue that any effort to present the truth to Republican base voters will inevitably fail, so loyal are they to Trump. Ironically, this theory’s most ardent advocates are leftist Democrats, who hope to tie the Trump albatross around Republicans’ necks forever. The stakes are high.

Ultimately, of course, if truth cannot prevail, the future would indeed be dire.

But all that is really required is for Republican leaders other than Trump to do some leading.

If more speak out, the Trump fantasy can be exposed, and his supporters will reconcile themselves with his defeat while remaining loyal to what will hopefully be a revived, Reaganite Republican party.

In the meantime, the current controversy over whether Biden and his team can formally begin the transition process will also be resolved.

Growing numbers of congressional Republicans are pressing for Biden and his senior staff to receive intelligence briefings; others have concluded what should now be obvious, namely that the formal transition itself should get underway.

There need be no admission or concession by Trump that he has lost in order to make the prudent management point that whoever wins needs to be fully prepared on January 20.

Trump obviously doesn’t need a transition, but Biden does, and the sooner it begins, the better.

Forecasting what happens after January 20 remains difficult until the results of two runoff elections for Georgia’s Senate seats are held on January 5.

Peculiarities of Georgia election law require the runoffs, which will be hotly fought. If Republicans prevail in just one, they will retain control of the Senate; if they win both, they will have come through a difficult 2020 campaign losing just one seat net.

Effectively, therefore, anything Biden wants will require dealing with Republican Senate leader Mitch McConnell, who will be the second most powerful man in Washington.

Somewhat under-reported is the success story for Republicans in the House of Representatives, where they are already projected to gain six-to-seven seats from their pre-November 3 totals, and probably more.

A majority of the House is 218 members, and Republicans could be just around 212. If House Democrats maintain their unity, they can still work their will, but the possibility of splitting their slender majority present numerous opportunities for Republicans.

Even more troubling for Democrats and Speaker Nancy Pelosi are the upcoming 2022 elections; in US history the incumbent President’s congressional party almost always suffers losses, sometime quite significant, in the midterms.

This shadow alone will diminish the Democrats’ maneuvering room for the next two years.

In short, the 2020 election was a loss for Trump, but a surprising success for Republicans in the House and Senate, and also in the States, where they picked up one additional governership, and several state legislative houses, crucial in the redistricting required by the 2020 census results. Stay tuned!