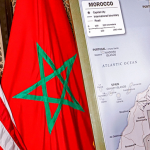 Outgoing President Donald Trump’s Dec. 11 proclamation that the United States would recognize Moroccan sovereignty over Western Sahara marked yet another low for his administration. In an unrelated deal to facilitate the exchange of diplomatic relations between Israel and Morocco, Trump’s decision to throw the Sahrawi people under the bus ditches three decades of U.S. support for their self-determination via a referendum of the Sahrawi people on the territory’s future status.

Republican Sen. James Inhofe was exactly right when he said in a Senate floor speech on Dec. 10 that Trump “could have made this deal without trading away the rights of this voiceless people.” Inhofe is one of the few U.S. experts on Western Sahara, built up through years of service on both the Senate Committee on Foreign Relations and the Committee on Armed Services, which he now chairs. I have worked frequently with Inhofe on the Western Sahara issue over the years, dating back to my own initial involvement as assistant secretary of state for international organizations during the George H.W. Bush administration.

Warm but unofficial relations between Israel and Morocco are nothing new. Morocco has long considered recognizing Israel, and King Hassan II aggressively pursued that option during the 1990s, as did other Arab nations. Secret Israeli-Moroccan contacts have been commonplace since. Today, full relations are thus neither new nor difficult to achieve. The United Arab Emirates and Bahrain have recently taken the plunge, and more could follow. But what Morocco has actually agreed to remains unclear; Rabat denies it will open anything more than a “liaison office” in Israel (which it did in the 1990s), or that its deal actually involves full diplomatic relations.

The Washington Post reports that in recent weeks, Trump became irate that Inhofe would not accede to nongermane amendments that the president wanted in the annual defense authorization bill, such as repealing Section 230 of the Communications Decency Act, which shields social media platforms from liability for what they publish. Trump’s advisors reportedly persuaded the president to stiff Inhofe on the Western Sahara in retaliation. But this standoff is far from over. Inhofe is a determined Sahrawi proponent, and, from his powerful position as chairman of the Armed Services Committee, he will make the argument to reverse Trump’s decision directly to Biden if need be.

Where, then, does Trump’s reckless and unnecessary move leave President-elect Joe Biden and the foreign governments most directly interested in the Western Sahara?

The answer begins with the obvious—the very name of the U.N. peacekeeping operation authorized by Resolution 690 of 1991 was “Mission of the United Nations for the Referendum in Western Sahara” (MINURSO being the Spanish acronym). When Spain’s colonial rule collapsed with Francisco Franco’s 1975 death, and after an initial conflict between Mauritania and Morocco, the Polisario-Moroccan military hostilities left the territory partitioned and its status unresolved. The Polisario’s fundamental choice in 1991 was to suspend its ongoing confrontation with Morocco in exchange for a referendum, in which the choice would be between independence or unification with Morocco.

King Hassan II fully understood that this deal was, in Resolution 690’s express terms, “a referendum for self-determination of the people of Western Sahara.” The choice, stated in the first paragraph of the U.N. Secretary General’s report approved by Resolution 690, was “to choose between independence and integration with Morocco.” The 1997 Houston Accords, negotiated under James Baker’s auspices as the Secretary General’s personal envoy, reinforced that understanding. (At the time, I worked for Baker at the U.S. State Department, and I later assisted him in his work as the U.N. envoy.)

Members of the Sahrawi People’s Liberation Army take part in a ceremony to mark 40 years after the Sahrawi Arab Democratic Republic was proclaimed by the Polisario Front in the disputed territory of Western Sahara at the Rabouni Sahrawi refugee camp in Tindouf, Algeria, on Feb. 26, 2016.
Can John Bolton Thaw Western Sahara’s Long-Frozen Conflict?
The Polisario Front has created an international diplomatic presence on a shoestring budget and sees the Trump administration as its best hope in decades to gain independence from Morocco.

Nonetheless, Morocco has spent nearly three decades preventing the referendum from taking place. Together with France and other Security Council allies, it has tried, unfortunately with some success, to blur Resolution 690’s referendum commitment. Rabat has offered a variety of so-called autonomy proposals, not one of which has ever come close to being acceptable to the Polisario, proposing a referendum on incorporation versus “autonomy.” To the Sahrawi, this is a take it or leave it proposition, and has therefore always been unacceptable. From Morocco’s perspective, this kind of so-called peace process could go on forever: Rabat not only controls the vast bulk of the Western Sahara’s territory militarily, but, through successive waves of settlement from Morocco proper, is trying to overwhelm the ethnic Sahrawi population. Secretary General António Guterres’s statement following Trump’s announcement, for example, called for preserving the 1991 cease-fire, but spoke only about a “resumption of the peace process.”

If Morocco won’t accept a referendum, it doesn’t deserve a cease-fire or a false “peace process.”

This is a pathetic—and authoritative—admission of 30 years of U.N. failure. The Polisario did not abandon its war against Morocco for a “peace process,” but for a referendum. One obvious option, therefore, is to terminate MINURSO, and return to the status quo ante of open hostilities. With the original deal broken, and Morocco for three decades evincing no intention of accepting a referendum, why keep a U.N. peacekeeping operation on perpetual life support? If Morocco won’t accept a referendum, it doesn’t deserve a cease-fire or a false “peace process.”

In fact, a major cease-fire violation occurred last month, so serious that many believed full military hostilities might resume. For now, there is no way to tell whether this is likely, or what the outcome might be. But make no mistake, the Polisario is at a crucial juncture. It would be fully justified if it chooses to return to the battlefield, but much depends on the positions of Algeria, Mauritania, and others—and what resources are available.

For the Polisario, Trump’s about-face is more than disappointing. It broke a U.S. commitment that once looked rock-solid, and which I tried to defend and advance during my time as national security advisor—often in the face of the State Department’s determination to find a way to solidify Moroccan control of Western Sahara.

There are other obstacles. Ironically, Trump’s insouciance gave the State Department bureaucracy exactly what it has wanted since Resolution 690 first encountered stiff Moroccan resistance within months of its adoption nearly three decades ago. Rabat had argued that losing the Western Sahara referendum would destabilize its monarchy, and the State Department’s bureaucrats lapped it up. In fact, the referendum’s outcome would almost certainly depend on who constitutes the voting-eligible population, yet another issue Morocco has contested despite its earlier commitment to the 1975 Spanish census defining the universe of eligible voters—an era before Morocco sought to engineer the territory’s demographics in its favor. Notwithstanding substantial Moroccan transfers of population into Western Sahara, and the supposed benefits of its rule, Rabat and the U.S. State Department both fear they haven’t done enough to achieve the result they want.

Morocco is no longer really concerned about its monarchy’s stability being undermined by formal diplomatic ties with Israel than are Bahrain, the United Arab Emirates, or other Gulf Arab states yet to come around. What is really behind Morocco’s argument is that Rabat has come to believe its own propaganda, rather than its underlying reason for the occupation—which is that it wants control over possible substantial mineral resources buried under all that Saharan sand, fishing assets, and possible resort development opportunities for tourists.

Biden, of course, will have a few other things on his mind on Jan. 20 apart from Western Sahara. While Biden and his advisors formulate their own policy, they can lay down a marker that Trump’s about-face is under review, insisting in the meantime that a referendum is still a prerequisite before the United States will consider the Western Sahara issue resolved. There should be no outcome acceptable to Washington that is not approved by the Sahrawis in an internationally conducted, free, and fair vote—with a yes-or-no choice on full independence on the ballot. Morocco may gag at this option, but it has little choice but to accept it if the United States insists on it.

For Algeria, Mauritania, Israel, and European leaders, there is not much to lose if Biden reverses Trump’s misguided move. It will be a welcome relief that the prospect of conflict with Morocco has been at least postponed. These states should all insist that the Western Sahara’s future should not be shuffled aside, a development that only benefits Morocco, given its de facto control over the bulk of the territory.

Bahrain and the United Arab Emirates have already freed Israel from the formal diplomatic isolation it faced for many years. Whatever Morocco does in response to a new Biden policy that reaffirms Western Sahara’s status quo will affect Israel only slightly. And graciously accepting what a new Biden administration says about the territory may well be in Israeli Prime Minister Benjamin Netanyahu’s interest. In this way he could, at essentially no cost to Israel—for which the Western Sahara is a non-issue—add to his political capital with Biden for issues that really matter, like taking on the threat posed by Iran.

The European Union—especially Spain, the former colonial power, where support for the Sahrawi remains quite strong; and France, Morocco’s protector—could summon up a few words about self-determination to help move the process along. If they choose not to say anything, they should remain silent bystanders and avoid compounding Trump’s mistake.

A post-inauguration bipartisan agreement between Biden and Inhofe could repair the disarray caused by Trump’s gratuitous grandstanding. Such a deal would mark a welcome change from the past four years of chaos and division, and a return to pursuing U.S. national interests rather than those of Donald Trump.