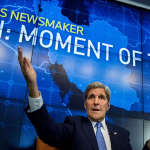 This article appeared in The National Review on January 7, 2020. Click here to view the original article.

The first great conflict of Joseph Biden’s presidency could erupt on the field of national security. In his most significant foreign-policy achievement, Presi­dent Donald Trump withdrew from Barack Obama’s 2015 Joint Compre­hensive Plan of Action, which traded limits on Iran’s nuclear program for immediate financial relief (an estimated $120–$150 billion) and the lifting of Western economic sanctions. Signaling a knee-jerk return to failed Obama policies, the president-elect has promised he will immediately rejoin the JCPOA in a hopeless quest for a peaceful settlement with Tehran’s mullahs.

New presidents feel the need to score policy wins in the first months of their term. Democratic down-ballot failures in 2020 mean Biden will have little maneuvering room to advance his domestic issues, and will instead have to turn to foreign policy for any early successes. Despite gaining the presidency by a healthy Electoral College margin (and winning the popular vote), the Demo­crats have seen their advantage in the House of Representatives shrink to a 222–212 majority (depending on two possible challenges), their narrowest since 1942. The Senate outcome is even closer, with the majority turning on the January 5 Georgia runoffs. Biden could be the first new president since George H. W. Bush 32 years ago to enter office without a Senate controlled by his party.

While the executive enjoys vast power in foreign affairs, Republicans can put up a stiff fight through a combination of constitutional strategy, congressional tactics, and political infighting. (We wrote on this subject for NR six years ago, in “Advice on ‘Advice and Con­sent,’” December 31, 2014, without noticeable effect on the Senate; but we decided to try again under new circumstances.) They should refuse to accept the JCPOA as an international agreement because of its failure to undergo the treaty process required by Article II of the Constitution. If Biden emulates Obama and withholds JCPOA 2.0 from Senate consideration, Congress should deploy its own constitutional powers by imposing mandatory sanctions on Iran, beefing up military spending in the region, withholding appropriations to the State Department and other agencies, and refusing to confirm nominees to national-security positions or cooperate with the White House on other elements of its agenda.

The JCPOA is not the only international agreement the incoming administration intends to revive. “The United States will rejoin the Paris Agreement on day one of my presidency,” Biden promised in December, referring to the global climate-change agreement. Biden also envisions reentering the World Health Organization, from which Trump withdrew for its cover-up of the COVID-19 pandemic’s China origins. The JCPOA, though, raises the most immediate and profound constitutional problems.

The multilateral JCPOA reflected Obama’s misbegotten notion that, with the nuclear-weapon issue “resolved,” Iran under the mullahs would begin behaving like a normal nation. Rather than using Iran’s financial bonanza to benefit its impoverished people, however, the mullahs funded terrorists in Lebanon and Iraq, Assad’s regime in Syria, and Yemeni rebels. President Trump wisely pulled the U.S. out of the agreement in May 2018 and imposed even harsher sanctions that have pushed Iran to the brink of economic collapse. The ability of Iran to foment terrorism and employ conventional forces to undermine our allies in the region, such as Israel, Saudi Arabia, and Egypt, has suffered, but it remains deeply threatening.

Nevertheless, Biden announced in December that, “if Iran returns to strict compliance with the nuclear deal, the United States would rejoin the agreement as a starting point for follow-on negotiations.” So doing would only reward Iranian malevolence. The mullahs have never given up their nuclear ambitions; they lied repeatedly to conceal their covert nuclear-weapons program and greeted European efforts to save the JCPOA by building up Iran’s enriched-uranium stockpiles beyond approved limits. According to media reports, Iran is demanding that the incoming administration immediately rejoin the deal and lift all sanctions unconditionally, without any corresponding freeze in Iranian uranium enrichment. Tehran also intends to seek compensation for the economic losses caused by the Trump-administration sanctions, making Iran the clear favorite for 2020’s “Chutzpah of the Year” award.

Republicans should attempt to thwart Biden’s plan by demanding adherence to the Constitution. In one of many demonstrations of his disregard for the separation of powers, President Obama refused to submit the JCPOA to the Senate as a treaty. Article II of the Consti­tution, however, recognizes only a single manner in which the United States may enter international agreements: The president “shall have Power, by and with the Advice and Consent of the Senate, to make Treaties,” but only if “two thirds of the Senators present concur.” Article II’s plain meaning and history require that any agreement that restricts the nation’s sovereignty must undergo Senate approval by a two-thirds supermajority.

Joe Biden himself used to believe that the Senate’s consent was required for all significant international agreements — at least when Republican presidents made them. “With the exception of the SALT I agreement, every significant arms control agreement during the past three decades has been transmitted to the Senate pursuant to the Treaty Clause of the Constitution,” Senators Biden and Jesse Helms declared about the 2002 Treaty of Moscow, in which the U.S. and Russia agreed to deep reductions in their nuclear arsenals. “No constitutional alternative exists to transmittal of the concluded agreement to the Senate for its advice and consent.” In the 1980s, Biden even attacked President Reagan’s missile-defense programs because they went beyond the terms of the Anti-Ballistic Missile Treaty with the Soviet Union and therefore required a new amendment to the treaty. He went so far as to pen a scholarly article declaring the treaty power to be “a constitutional partnership” between the president and the Senate.

Unfortunately, the Senate over nearly a century has allowed its treaty role to be frittered away, as “sole executive agreements” have become the overwhelmingly dominant mode of U.S. international agreements. While there is no “bright line” that establishes what must be considered a treaty rather than an executive agreement, JCPOA 2.0 clearly qualifies as a treaty. And for senators seeking to begin the long-term project of restoring their body’s authority, the Iran nuclear deal is an excellent starting point.

Senate Republicans should force President-elect Biden to live up to his own words. The Constitution’s requirement of supermajority consent to treaties was meant to guarantee that they would be backed by the highest levels of political consensus. As Alexander Hamilton explained in Federalist No. 75, “The vast importance of the trust, and the operation of treaties as laws, plead strongly for the participation of the whole, or a portion, of the legislative body in the office of making them.” Allowing a single man to make international agreements, he warned, would not just risk unwise decisions but also invite the possibility of the personal corruption of a president who might be tempted by either avarice or ambition.

The Biden administration is sure to resurrect Obama’s claim that the JCPOA did not amount to a treaty because it did not constitute a legally enforceable agree­ment. The JCPOA was not even “a signed document,” the Obama State Department under John Kerry explained, but just a series of “political commitments.” But in 2015 congressional hearings, the administration more candidly admitted that it simply could not persuade two-thirds of the Senate. Asked by a member of the House Foreign Affairs Committee why the JCPOA was not considered a treaty, Kerry (who will join the incoming administration as Biden’s “climate czar”) replied, “Well, Congressman, I spent quite a few years trying to get a lot of treaties through the United States Senate, and it has become physically impossible.” He went on: “That’s why. Because you can’t pass a treaty anymore.”

Obama refused to submit the JCPOA to the Senate, which meant the Senate had nothing on which to vote. Repub­licans responded by enacting the 2015 Iran Nuclear Agreement Review Act, which not only was toothless but unfortunately gave the JCPOA the patina of having survived congressional scrutiny. Reversing the Constitution’s presumption against entering international agreements, INARA required Congress to pass a law to reject the JCPOA, subject to presidential veto. Unsurprisingly, the JCPOA sailed on.

In 2015, senators effectively accepted defeat. This time, if Biden flouts the Senate’s constitutional treaty role, the Senate should retaliate asymmetrically. Most important is Congress’s appropriations power, perhaps its strongest constitutional sword. Threatening to defund large parts of the State Depart­ment would certainly get the new administration’s attention. Former Connecticut Republican senator Lowell Weicker, for example, once forced action on a nomination for U.S. attorney by obtaining a rider barring any use of appropriated funds for travel by the attorney general. Talk about getting someone to wake up! The appropriations power also allows Congress to earmark funding in military programs for those it considers priorities, such as increased capabilities to deal with Iran’s threat. Mandatory statutory sanctions against Iran reflect another possible front in the struggle against Biden’s appeasement.

Similarly, if the Senate isn’t afforded an opportunity for advice and consent on JCPOA 2.0, it can easily withhold advice and consent on everything else, starting with the nominee for secretary of state. This is a test of constitutional wills rather than a matter of the Senate’s proper role in confirmations — on that front, both parties have been overdoing it for decades. Fixing the specifics of the confirmation process, now badly out of sync, is a subject for another day.

Make no mistake, we are proposing Senate (and House) hardball here. As in 2015, JCPOA opponents in the legislative branch may not want to play. But if that’s the case, let’s hear no more complaints about the continuing decline of congressional influence in national-security affairs.