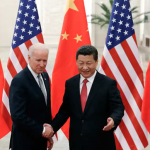 China honored me with an Inauguration Day surprise, sanctioning 28 former Trump administration officials, myself included, for being generally unkind to its authoritarian rulers. China’s real target, though, was the minutes-old Biden administration — a hint of things to come if it doesn’t dance to Beijing’s tune.

President Biden now has an evanescent opportunity to think strategically about China-U.S. relations across the full range of politico-military and economic issues. Chart the wrong course, and the negative consequences for America and the West generally could be crippling.

In 1989, George H.W. Bush conducted an analogous review of U.S.-Soviet relations. Criticized for dawdling and initially being too skeptical, Bush nonetheless got it right. His calibrated response to Eastern European unrest hastened the Warsaw Pact’s collapse, and his 1991 support for Boris Yeltsin led inexorably to the U.S.S.R.’s breakup. Freedom found an opening only a few believed possible.

Stressing the need for strategic planning shouldn’t be necessary, but after former president Donald Trump, even simple things need restating. The media usually focus on discrete decisions, but the primal question is whether his successor will think, and then act, strategically. Trump did neither. He didn’t read the fine strategy papers set before him, or else didn’t absorb them. His chaotic “decision-making” led from a bromance (in his mind at least) with Chinese President Xi Jinping to a trade war.

If Trump had won a second term, he might have careened back to bromance and a disastrous trade deal, just for starters. His pre-Nov. 3 “hard line” sought to reap the perceived political benefits of attacking “the China virus.” The post-election tsunami of sanctions and other diplomatic gambits from the administration reflected the reality that he was just no longer paying attention.

In policy terms, these measures were largely correct and should have been taken years ago. As presented, however, they were not strategically coherent, but simply additions to the archipelago of dots constituting Trump decision-making. Beijing clearly sees this, and by thus striking preemptively at the outset of Biden’s term, hopes to roll back as much as possible.

Of course, it matters enormously whether the administration pursues the correct strategy. Precisely because I both reject Trump’s strategic incoherence and fear that Biden represents merely a warmed-over version of President Barack Obama’s limp China policy, there must be real debate, both in public and in Congress, on the substance of Biden’s China strategy. That should not be too much to ask.

Brief op-eds are inadequate for the hard strategic task of matching U.S. resources to its China policy objectives, but here are several key markers. Once Deng Xiaoping broke from orthodox Marxism in the late 1970s, America’s China policy rested on the premise that economic reform would produce increased domestic freedom, and that internationally China would be a “responsible stakeholder” engaged in “a peaceful rise.” Both predictions have proven false, as Secretary of State-designate Antony Blinken tacitly acknowledged in his recent confirmation hearing.

We need to know whether Biden shares this conclusion and what flows from it, because the stakes are high. For example, China can no longer be seen as just a normal trading partner. Trump had it backward, typically, when he frequently described the European Union as like China, only worse. The E.U. often out-bargains U.S. trade negotiators, a legitimate concern; China seeks not just trade advantages but also hegemony in the Indo-Pacific and then globally. This is a far more serious cause for alarm than E.U. auto tariffs. China’s theft of intellectual property alone is a paramount national-security threat, not an obscure trade issue.

Similarly, China’s military belligerence in the East and South China seas, its designs on Taiwan, its enormous buildup across the full spectrum of military capabilities and its bullying of benign powers (such as abusing Canada for arresting Huawei CFO Meng Wanzhou in 2018 at the U.S. government’s request) all belie any notion of a peaceful rise. Faced with such Chinese provocations, a substantial reduction in the U.S. defense budget sought by some Democrats would hardly bespeak resolve. Instead, a major increase is needed, and not just because of China.

Understanding the nature of Beijing’s threat is also critical. This is not an ideological, Cold War struggle. China is not pursuing Marxist theory, although its domestic policies certainly have nothing to recommend them. Xi is not only crushing Uighurs and other non-Han minorities, but also extinguishing religious freedom and crushing Hong Kong’s pro-democracy movement. American minds do not take kindly to “civil-military fusion,” or “social credit scores,” whereby Beijing measures the worthiness of its own citizens. This is not Communism at work, but authoritarianism, pure and simple. Misreading it as Marxism 2.0 will impede strategic clarity, not enhance it.

Finally, a process point. Debate about the United States’ China strategy must be … strategic. We exacerbate political partisanship if policy debates are about personalities rather than substance. Because Trump didn’t “get” policy, he saw criticism from his political foes as a personal affront and lashed out. His opponents responded in kind, and partisanship worsened. Trump is now yesterday’s news, as his style of politics should be, especially in national-security affairs.