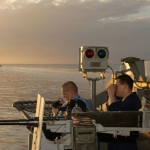 Countries and companies should wake up to new political risks to shipping and supply chains.

This article appeared on Bloomberg.com on March 29, 2021. Click here to view the original article.

The Suez Canal Crisis of 2021 is upon us. The canal is closed, and maritime traffic jams extend into the Mediterranean and Red Seas. The reopening date is uncertain, supply chains are stressing, and executives are nervous.

“Crisis” may strike some as the wrong word. After all, there are no Cold War tensions as there were during the 1956 Suez Crisis, which closed the canal for six months, as the USSR simultaneously crushed the Hungarian Revolution. Nor are there Arab-Israeli military hostilities as during 1967’s Six-Day War, which (along with the 1973 Yom Kippur War) closed the Suez Canal for eight years.

The current blockage apparently arose from adverse weather conditions. But no one should underestimate the geostrategic warning it sends about the potential for political sabotage. As nature inspires art, so too does it inspire malevolence. This is not merely about geography, but also about today’s broader political risks to world commerce, ranging from one errant ship at Suez to confronting China’s enormous political, military and economic challenge.

Indisputably, political risks are now rising from sources not previously perceived. The coronavirus pandemic, for one, has alerted terrorist groups, rogue states and major powers alike that biological (and chemical) weapons have far more coercive power than once recognized. Such weapons are comparatively easier to make than nuclear devices.

New political risks have come on little cat feet, almost unnoticed. For decades, foreign investment in and reliance on supply sources in China expanded as if political risk were irrelevant. No longer. Former President Donald Trump’s tussle with Beijing, hardly amounting to a “trade war,” simply underscored the emerging political risks of dealing with China. Looking to hedge their bets, some foreign companies were already shifting capital allocations and supply chains to Southeast Asian countries, India and elsewhere. That trend is accelerating.

And the aggregate China risk factor will only increase. Beijing’s crackdown in Hong Kong and the city’s melancholy demise as a “rule-of-law” international enclave in China is all but certain. Computer-driven industrial and financial espionage, outright theft of intellectual property, discrimination against foreign firms, and internal political and religious oppression all make China an increasingly risky place to be. And as political conflicts between China and the West continue to escalate, it becomes more dangerous to rely on Chinese supply sources.

Many Europeans, favored Wall Street investors and well-paid pundits argue that rising tensions are not inevitable. Perhaps. Certainly, the risks of relying on China don’t rule out having any presence whatever in the country. There are innumerable intermediate options. Yet in virtually every line of business, the intermediate options cry out for estimating a higher risk to any material supply-chain investment in China.

Moreover, China is creating its own geostrategic choke points, by building naval and air bases on islands, rocks and reefs it claims in the South China Sea, and declaring the region a Chinese province. In the East China Sea, Beijing is threatening Taiwan and challenging Japan on the sovereignty of the islands called the Senkaku in Japan and the Diaoyus in China. This menacing behavior leaves the economies of Japan, South Korea, Taiwan and Southeast Asian countries in danger.

Clearly, geopolitical risks are rising sharply. And to mitigate disruption, governments and businesses must diversify their supply chains and methods of shipping, and avoid geographic or political chokepoints, man-made or natural.

The United Arab Emirates has shown foresight by building an oil pipeline bypassing the Strait of Hormuz. The East-West Petroline, running from Saudi Arabia’s Eastern Province to Yanbu on the Red Sea, was also designed to avoid the Strait of Hormuz. Nevertheless, shipments must traverse either the Suez Canal or the Bab el-Mandeb Strait at the Red Sea’s southern end, now threatened by Yemen’s Houthi rebels (who have also attacked the Petroline itself). Today’s Middle East might consider building pipelines and other shipment methods through Jordan to Israel’s Mediterranean coast. Iran may well have had such an alternative route in mind for its (and Iraq’s) oil in extending its military dominance through Lebanon and Syria to the Mediterranean.

By the same token, why shouldn’t American and European companies concentrate more investment and manufacturing in the Western Hemisphere (or at home) rather than in China? As long as they avoid the likes of Cuba, Nicaragua and Venezuela, their political risk would be drastically lower, not to mention their transportation costs and possible losses during shipping. Perhaps the 2021 Suez Canal Crisis will have a silver lining after all, impelling governments and companies to come to terms with the new global security dangers they face.