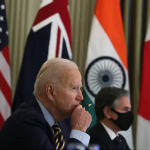 On Thursday, the Biden administration will conduct its first high-level meeting with China. Secretary of State Antony Blinken and national security adviser Jake Sullivan will confer with senior Communist Party Politburo member Yang Jiechi and Foreign Minister Wang Yi in Anchorage. Sullivan has said he and Blinken will explain how the new team “intends to proceed at a strategic level,” conveying its interests and values, and its concerns with Chinese activities.

Biden has spoken once with Chinese President Xi Jinping, although China’s readout of the conversation portrays Xi as doing most of the talking about what he expects from Washington. Last week, Biden held the first summit (virtually) of the “Quad” (Japan, India, Australia and the United States), a unique, still-evolving forum to foster a “free and open Indo-Pacific.” Just before Anchorage, Blinken and Defense Secretary Lloyd Austin will meet their South Korean and Japanese counterparts.

This is elemental choreography, reassuring allies and signaling that “regular order” in diplomatic process is back in Washington.

But process is not substance, and certainly not a strategy for dealing with unacceptable Chinese behavior. A by-no-means-comprehensive list of Beijing’s transgressions that require U.S. attention would include: meddling, blatant and subtle, with U.S. public opinion; building military bases in the disputed South China Sea; menacing Taiwan, Vietnam and India; increasing strategic nuclear forces and egregious global cyberwarfare; empowering North Korea’s nuclear weapons program; concealing the origins of covid-19; stealing intellectual property and forcing technology transfers; and genocide against Uyghurs and the repression of Hong Kong.

But listing points of friction is also not strategy. Considerable risk lies ahead if Biden’s most important China objective, however understated, is to “explore whether there are other avenues for cooperation,” as Blinken recently testified. This is equivalent to saying, “Let me tell you what our weak points are.”

Despite the administration’s denials, zeal for a climate deal may be first on the list.

Even if “other avenues for cooperation” is only a diplomatic nicety, Blinken and Sullivan must stress to the Chinese that Biden’s policy will differ fundamentally from his predecessors’. U.S. public opinion, as in many industrial democracies, has turned decidedly negative toward Beijing because of its conduct regarding covid. China’s manifold noxious actions, noted above, have also increased public disapproval.

That ought to tee up the most important point Blinken and Sullivan should make: This is not the Obama era. The good times (for China) are not going to roll again without massive changes in Beijing’s behavior — and not just by making promises, as was so often the case in years past. The United States today cannot afford to revive former president Barack Obama’s blinkered acquiescence in China’s conduct.

Given Biden’s few campaign pronouncements on foreign policy, his eight years as Obama’s vice president and a new administration overflowing with Obama alumni, Beijing could be excused for hoping that (his criticism of the Uyghur genocide notwithstanding) Biden will be the successor to Obama that Xi had expected Hillary Clinton to be in 2017. Biden would do well to disabuse Beijing of that idea.

Distinguishing himself from Obama may be hard for Biden. Ironically, distinguishing himself from Donald Trump’s transactional propensity for short time horizons and splashy deals may also prove difficult. If reaching climate change agreements with Beijing is as urgent as the vibes emanating from Biden’s special envoy John F. Kerry suggest, it could be impossible. Trump’s unpredictable gyrations are gone, but his fascination with big deals regardless of the cost to the nation may unfortunately remain.

Blinken and Sullivan must be clear, if they can be, that Biden, unlike Obama, recognizes China as at least an adversary, if not an enemy — and that the United States will tailor its policies accordingly. And that, unlike Trump, Biden will think and act strategically.

In Anchorage, the U.S. officials need not be bellicose in making these points, but they must be as confident and assertive as their Chinese counterparts will undoubtedly be in advancing Beijing’s interests. If Blinken and Sullivan fail to press hard for, say, less-belligerent Chinese behavior in the South China Sea to avoid jeopardizing what appear to be higher-priority objectives on climate change, Yang and Wang will sense it instantly. And Xi will not hesitate to try to exploit any opportunity presented.

This first high-level Washington-Beijing encounter will not resolve any major issues, and no one expects it to. If Blinken and Sullivan emphasize that Biden is developing a coherent strategy to resolutely oppose China’s objectionable behavior, that alone would be a vital difference from the past 12 years. If not, however, the China question will become an increasingly important focus of America’s domestic political debate, and one where Biden is unlikely to fare well.