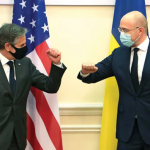 He aggresses in a gray zone between NATO and Russia, so let’s remove it

This article appeared in The National Review on May 13, 2021. Click here to view the original article.

The Biden administration billed Secretary of State Antony Blinken’s May 6 visit to Kyiv as showing support for Ukraine’s struggle against Russian aggression. Instead, Blinken served up only rhetorical pablum, retreating from what senior Trump officials (although not Trump himself) did to back Ukraine and re­turning to Obama-era blandishments. Vladimir Putin must be delighted.

Inexplicably, moreover, Blinken equated Russia’s belligerence with Ukraine’s admittedly substantial corruption problems, stating that there is “aggression from outside . . . and, in effect, aggression from within.” This moral equivalence is nonsensical. For both Washington and Kyiv, corruption is hardly as strategically important as Moscow’s threat. Ukrainian president Volodymyr Zelensky won election by campaigning against corruption, and while he is struggling to prevail, lecturing him publicly will not improve his performance.

More fundamentally, President Biden still has no policy to deal with Russia (or China) in Europe. During his April 13 telephone call with Putin, for example, Biden raised a long list of issues and ended by inviting Putin to a bilateral summit. Strategic coherence, however, requires allocating priorities and resources among national-security problems, not just listing them. Absent substantive policy direction, process steps such as summits are theater at best and often counter­productive, highlighting the vacuum that lies beneath public rhetoric.

The Kremlin tried to mirror its Belarus policy in Ukraine, because both are central to its vision of “Russia.” Moscow initially succeeded in Kyiv, but the 2004 Orange Revolution brought such dramatic changes that, in April 2008, George W. Bush proposed putting Ukraine and Georgia on a sure path to NATO membership. Germany and France rejected Bush’s proposal, and four months later Russia invaded Georgia. Russia subsequently subverted the Orange Revolution through fraud and skullduggery but was in turn reversed by another popular uprising in 2014. In retaliation, Putin seized Crimea outright and created a new frozen conflict in eastern Ukraine.

However messy the history, Russian aggressiveness within the former USSR harms U.S. interests by destabilizing the region and, left unchecked, threatens instability across Europe. Virtually all the states of “new Europe” — the post–Cold War generation of NATO members — believe, with good reason, that blocking Moscow’s interference is critical to their growth and stability. Old Europe, especially Germany and France, is still somewhat tone-deaf here, so the diplomatic heavy lifting ahead for Washington should not be underestimated — par for the course even at the Cold War’s height.

Russia’s belligerence in Europe also shows its increasing, disturbing closeness to China, a relationship reflecting Moscow’s importance to Beijing for supplying hydrocarbons and high-tech weapons and the regimes’ perception of common interests in shielding the likes of Iran and North Korea from U.S. pressure. Breaking this emerging axis should be a high U.S. priority and is entirely consistent with thwarting Russian interference across its European borders.

As long as a gray zone remains be­tween NATO and Russia, instability will persist. Shrinking this inherently dangerous geographic space reduces potential Russian mischief, and ultimately confronts Moscow again with the question whether to join the West or oppose it.

Ultimately, inclusion in NATO is the only way for the endangered countries to minimize the inevitable uncertainty and instability between the alliance and Russia. Previously, NATO has rightly shied from adding new members with foreign combatants on their soil, seeing that as inheriting a war and thereby triggering Article Five of the Washington Treaty. Reducing the gray zone does not immediately require any new NATO memberships, but the alliance can surely devise an appropriate status to handle today’s European problem.

To get there, our primary focus should be to substantially augment Zelensky’s diplomatic and military efforts to expel Russia from eastern Ukraine, and then to impose steeply increasing costs on Russia if it fails to respond diplomatically. Succeeding will not solve Crimea, but it will clear the decks to do so. Critically, we must keep Europe focused on rolling back Moscow’s blatant cross-border military action.

Moldova, tucked between Ukraine and Romania, is a frozen conflict ready for melting. Purportedly independent Transnistria, a Russian invention, exists separately from Moldova only through Moscow’s continued military presence. Simply raising international attention to this post–Cold War anomaly would startle the Kremlin, and a determined new government in Chisinau now provides the opportunity for Washington to step up.

Similarly, in Georgia, it is time to push back against Russia’s presence in Abkhazia and South Ossetia, with the aim of re-creating the April 2008 situation in which NATO membership for Ukraine and Georgia was serious and feasible. Ukraine and Georgia remain the two most strategically important gray-zone countries. In turn, taken more seriously after Biden’s acknowledgement of Turkey’s genocidal campaign during World War I, Washington can then address the Azerbaijan–Armenian conflict. Real progress, however, will likely have to abide Turkey’s 2023 elections. If incumbent president Recep Tayyip Erdogan loses, much will be possible. But if he wins, Turkey will be dangerously close to removing itself from NATO by spurning Mustafa Kemal’s post-Ottoman vision, and thereby badly undermining NATO’s position in the Caucasus.

Belarus is the hardest challenge of all, with alliance membership inconceivable for quite some time. Yet however difficult it may be, the U.S. cannot leave Belarus to Moscow uncontested. The map alone shows how geopolitically critical Belarus is for Poland, Ukraine, and the Baltic republics, and how grave a threat an offensive Russian military presence would be. Ironically, rising pro-democracy sentiment increases the risk of Russian military intervention, and perhaps an outright Anschluss, even as the popular discontent demonstrates that moving Belarus westward may be more feasible than previously thought. NATO needs more outreach into Belarus, and its Eastern European members should play a major role. Belarus also implicates the related question whether Sweden and Finland will finally accept the inevitable and join NATO, thereby bolstering the Baltic republics and others.

Russia’s promises not to intervene in its former republics — and its protestations that its intentions are benign — carry no weight. Russia will stop meddling when it knows that it cannot succeed and that crossing a NATO boundary (of some sort) will bring inevitable and highly damaging consequences. The sooner we make that clear, the better.

June’s back-to-back G-7 and NATO summits in London and Brussels, respectively, afford President Biden an opportunity to prove he has more to offer than recycled rhetoric. If he fails to deliver next month, there is trouble ahead for Ukraine, America, and Europe.