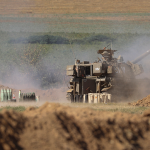 This article appeared in The Telegraph on May 17, 2021. Click here to view the original article.

Allegedly improper evictions of Arab tenants in East Jerusalem did not cause Hamas’s recent missile and drone attacks against Israel, nor did “longstanding historical grievances,” nor “frustration and alienation,” nor “the Arab street.” All these cliches together cannot justify terrorism against innocent civilian targets, let alone the roughly 1,500 missiles launched into Israel from the Gaza Strip. Hamas, and now perhaps Hezbollah (missiles having been recently fired from Lebanon) are not so irrational to believe that their aggression would produce anything other than the vigorous Israeli retaliation now underway.

More is at stake. For diverse reasons, but emphatically united by Israel as a common enemy, Iran and its terrorist surrogates concluded that this was a propitious moment to go for Israel’s throat. Why, and why now?
Tehran desperately wants relief from the economic sanctions Washington imposed after withdrawing from the 2015 Iran nuclear deal. Chaos in Israel suits its purposes. Hamas, hoping finally to eclipse the corrupt, dysfunctional Palestinian Authority as the dominant Arab voice in Gaza and the West Bank, had its own reasons to follow Iran’s lead.

Israel is currently seized by unprecedented political gridlock. Even if Bibi Netanyahu were rejected as Prime Minister, no potential successor could afford to be less hard-line on Iran than he. Accordingly, while Israeli parties centered upon Arab voters might have benefitted in the near term by supporting a new Israeli government, the interests of Iran, Hamas and Hezbollah are better served by continued turmoil and violence against Israel.

In fact, the hostilities appear to have terminated deal-making on a possible new Israeli coalition. Moreover, significant violence between Arabs and Jews inside Israel itself, massively under-reported by the press, could foreshadow long-term instability for Israel. More such violence only benefits terrorists and radicals across the Middle East. Further breakthroughs like the Emirati and Bahraini diplomatic recognition of Israel are highly unlikely for the foreseeable future, another win for Iran and the radicals. And while Israel is preoccupied, Iran is likely planning additional clandestine shipments of weapons and supplies into Lebanon, Syria, and Iraq.

Viewing America’s return to the nuclear deal in near-theological terms, President Biden feels pressured by Iran’s impending June elections. Moreover, Iran correctly sees that he faces major domestic political problems from the vehement opposition of Israel and the Gulf Arabs to any lessening of U.S. pressure on Tehran. Distracting Jerusalem reduces its ability to influence Washington in the nuclear negotiations.
Whether Iran instigated the current conflict, or merely took advantage of these circumstances to accelerate and expand it, we do not presently know, but the consequences are the same regardless. How should Israel and the wider West respond?

Negotiations are not the answer. Israel, fully justified by its right to self-defense, would instead be wiser to eliminate Hamas as a military force now, once and for all. Jerusalem had a similar opportunity to destroy Hezbollah during the 2006 Lebanon war, which was indeed Israel’s declared objective. Failing to follow through, however, left Hezbollah the dominant force in Lebanon, and allowed Iran to expand its presence in Syria. Hezbollah is a greater terrorist and conventional threat today than fifteen years ago. Israel should not ignore that lesson.

Moreover, what are negotiations and “commitments” from terrorists worth? In his December 29, 1940 fireside chat, best known for calling America “the arsenal of democracy,” President Franklin Roosevelt said, “No man can tame a tiger into a kitten by stroking it. There can be no appeasement with ruthlessness. There can be no reasoning with an incendiary bomb.” Some things never change.

The only point where negotiations with overzealous enemies makes sense is when the negotiation is one way. Many Americans and Europeans simply do not understand this approach, which, for Americans, ignores their own history. In the Civil War, General Ulysses S. Grant’s initials “US” were said to mean “unconditional surrender,” his trademark demand from defeated Confederate forces. And that was against fellow Americans. Israel can negotiate minor details of the Hamas surrender, but not whether there will be one.

Iran and Hamas crossed a real red line this time. Israel knows what it should do.