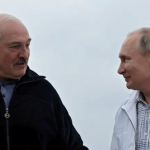 The United States and the European Union made a strategic mistake last summer by mishandling the unprecedented protests against Belarusian President Alexander Lukashenko’s autocratic regime. Now, after Lukashenko’s commission of air piracy on May 23 to kidnap an opposition critic, the West appears set on compounding its error by driving Belarus further into the welcoming arms of Russian President Vladimir Putin.

Rhetorical condemnation of the seizures came quickly, and E.U. and U.S. sanctions on the Lukashenko regime were announced. Lukashenko responded by accusing the West of launching “hybrid warfare” against Belarus.

Since Soviet days, Belarus and Russia have had an integrated air-defense system, leading to speculation about Moscow’s possible role or at least acquiescence in the kidnapping. Putin’s spokesman called such suspicions “obsessive Russophobia.” Putin pledged support to Lukashenko when the two met in Sochi, Russia, on Friday.

There is no question the West rightly concluded that Belarus committed air piracy, behavior entirely consistent with the regime’s autocratic methods. And as Alexei Navalny and many others could testify, it has the hallmarks of Putin’s equally authoritarian state next door.

Unfortunately, however, virtue-signaling, even accompanied by economic sanctions, does not constitute a satisfactory Western strategy to resolve a vastly more important issue: What is the future for Belarus as a whole? Will it be encouraged to follow the path of former Warsaw Pact states and at least some former Soviet republics into the West? Or will it be allowed to suffer full annexation into Russia?

President Biden needs to decide the answers to these questions and how to make them happen before his June 16 summit with Putin. There is no sign he knows what his answers are.

Last August, amid huge protests in Belarus prompted by a thoroughly rigged Lukashenko election, demonstrators said they were inclined toward neither Russia nor the West and did not want to be pawns in any international struggle. That view was supported by the lead E.U. foreign-affairs official. The Trump administration, consumed by the 2020 election campaign, said and did little. The protests failed. Lukashenko remained in power, and quiet returned. Until now. Will we repeat this strategic mistake?

It may be true that Belarus’s dissidents simply want to end Lukashenko’s oppression, without regard for the geopolitical environment in which Belarus exists. If so, it is touchingly — and dangerously — naive. No one in Moscow, certainly not Putin, sees Belarus’s fate as anything but closely tied to Russia.

Caught between NATO’s easternmost reach and Russia’s border, Belarus and other former Soviet republics are in a gray space that invites insecurity and Russian interventionism. Simply looking at the borders Latvia, Lithuania, Poland and Ukraine share with Belarus, Western Europeans would see that Minsk’s future is intimately tied to their own.

Supporting Belarus’s political opposition is thus not simply about deploring the thwarting of human rights through corrupted elections or the kidnapping of dissidents, unpalatable as those transgressions are. The potential freedom of all 9.5 million Belarusian citizens is at stake, since integrating Belarus into Russia would all but extinguish the chance for real liberty.

The fact that the West’s attention turned away from Belarus after the unsuccessful anti-Lukashenko demonstrations last summer, and refocused only following the Protasevich air-napping, shows that ad hoc, piecemeal approaches to a strategic problem are unsustainable and unlikely to succeed. Nor does it advance the Belarusian opposition’s cause to ignore the larger strategic context.

One approach, undoubtedly distasteful to the high-minded, would be to develop a way out for Lukashenko. Secure exile for himself and a select few followers in some well-appointed venue might be attractive to him at the right moment.

But such an extrication doesn’t happen overnight. It requires complex planning, specifically in this case to deter any possible Russian military moves into Belarus, as in Moscow’s seizure of Crimea from Ukraine or its creation of other “frozen conflicts” on Russia’s periphery. One potential bargaining chip: Putin’s prized Nord Stream 2 pipeline to Germany still isn’t complete, and it can be stopped at will, assuming the West and Germany in particular still have one.

Some may sniff at the idea of “impunity” for Lukashenko, but other former communist countries have decided that looking to the future outweighs a backward-facing, prosecution-at-all-costs strategy. Nelson Mandela’s South Africa did something similar, employing a post-apartheid “truth and reconciliation” policy.

We cannot underestimate how difficult are the prospects facing Belarus. It is certain, however, that sanctions and one-off expressions of displeasure with Lukashenko will not change his behavior or regime. Merely driving him deeper into Putin’s embrace risks losing all of Belarus, essentially forever. Time was growing short after last summer’s rigged elections. It is even shorter today.