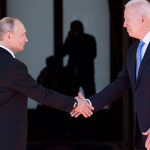 This article appeared in The Telegraph on June 13, 2021. Click here to view the original article.

Joe Biden’s first summit with Vladimir Putin this week comes relatively early in his new administration, so early it is fair to ask whether Biden is ready for it. If he does not yet know his goals regarding Russia and how to achieve them, far better to wait than to risk making pronouncements untethered to reality.

Biden, though, doesn’t have forever, although since his inauguration, he has engaged in a random walk. He has, variously, called Putin “a killer”; gratuitously extended the deeply flawed New START arms-control agreement; imposed sanctions for Russia’s chemical-weapons attack against opposition leader Alexei Navalny; waived economic sanctions that would have stopped Nord Stream II, Russia’s undersea gas pipeline to Germany; responded inadequately to Russia’s egregious “Solar Winds” computer hack, and others; and sanctioned Russia for interfering in Ukraine, while stressing how restrained these measures were.

Biden says he wants “a stable, predictable relationship” between Moscow and Washington, but his actions and statements to date reveal no gyroscope. Accordingly, while the Geneva summit may produce new American initiatives, don’t count on it. Putin is no novice, and the odds favour him springing new Russian gambits, for example articulating his framework to negotiate New START’s successor. There is no indication that Biden is prepared to respond on this critical strategic issue between the two countries, one enormously important to the UK and other nuclear-weapons states.

In domestic political terms, Biden wants to be seen as tougher on Russia than his predecessor, which is not hard to do rhetorically. Donald Trump was unwilling to criticise Russia for fear of giving credence to the narrative that he colluded with Moscow in the 2016 election. Trump was wrong politically: legitimate criticism of Russia would have enhanced his credibility, not diminished it. And Trump did little or nothing operationally to stop Nord Steam II, where even his rhetoric was anti-Moscow.

Considering the recent deluge of cyber attacks in America we are entitled to wonder if, without publicity, Biden has reverted to Barack Obama’s dangerously naïve approach to cyberspace. The Obama Administration hog-tied potential offensive US cyber operations in a web of decision-making rules that, as a practical matter, essentially precluded significant offensive activity. Those rules were changed substantially in 2018. American officials publicly welcomed being unleashed to take steps that protected the 2018 mid-term Congressional elections from Russian cyber interference, and hopefully later ones as well.

Has Biden disarmed the US in cyberspace, and have the Russians taken advantage? If so, Washington is making a potentially fatal strategic mistake. No one is looking for more hostilities in the cyber world, but the way to prevent conflict is to discourage adversaries from taking belligerent action for fear of the costs Washington will impose upon them. If the costs are seen to be high enough, they will back off. This is deterrence, which works in cyberspace as in all other human domains. Putin understands this point, but Biden has yet to prove he does.

After the G7 summit, Biden will be attending a Nato heads-of-state meeting in Brussels before his meeting with Putin. This choreography is correct: confer first with friends and allies, and then meet with Putin. The G7 meeting has focused heavily on finally exiting the coronavirus pandemic and economic recovery, and also planning against the danger of future biological-weapons and epidemiological threats.

This is entirely appropriate, but it is hardly a platform for serious consideration of wider geostrategic issues, let alone for coherent consideration of facing Vladimir Putin across the table. At Nato, Biden will be a comfort compared to the aberrational Trump, but no alliance strategy on Russia is likely to emerge.

Other than returning to normalcy, albeit merely on process, what does Biden have to say at such meetings on, for instance, Belarus, a new focus of the bipolar Nato-Russia struggle for advantage in Europe? What is his view on the increasing Russian (and Chinese) military attention to the Arctic? Biden’s Russia policy simply has not come into focus, which is troubling, even if not-quite-yet debilitating.

In short, Biden is taking a substantial risk in meeting Putin if he is only following a process of choreography, while seeking diaphanous goals like “stability” in the Washington-Moscow relationship. The wily and well-prepared Putin will have a very clear agenda, specific objectives, and the focused attention and energy to pursue them. Biden should hope the luck of the Irish is with him in Geneva.