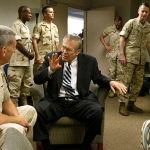 His thinking on arms control proved prescient—but the howls reverberate to this day.

Donald Rumsfeld’s remarkable record of public service encompassed critical periods of U.S. history. He began with what was already a successful career in congressional politics and as a domestic policymaker in the Nixon and Ford administrations. But his consuming interest was national security, which he got a taste of as U.S. ambassador to NATO in 1973. His stint there was ever so brief: After Watergate crushed the Nixon administration, newly installed President Gerald Ford, remembering their days together in the House of Representatives, brought Rumsfeld back to Washington as the White House chief of staff.

Ford’s presidency, the only one brought about by invoking the 25th Amendment of the U.S. Constitution, was anything but normal, including the complexities of dealing with Nixon’s remaining staff while trying to get Ford’s own team in place. Following the 1975 “Halloween massacre”—a major reshuffling of Ford’s cabinet—Rumsfeld became the nation’s youngest-ever secretary of defense.

Managing the end of the Vietnam War, a tragic defeat for the United States that was largely inflicted by the war’s domestic opponents, while simultaneously coping with the rising threat of Soviet nuclear capabilities, would have severely taxed a lesser figure. Rumsfeld, however, showed his resolve on the full range of issues. He pressed particularly on strategic weapons issues, eviscerating the debilitating arms-control ideology inherited from prior administrations.

Rumsfeld rejected the conventional wisdom on what constituted “strategic stability,” a phrase much beloved by the Soviet Union because it embodied Moscow’s view of the appropriate balance of power with the United States and the West. In contrast, Rumsfeld believed—correctly, as it turned out—that Moscow was cheating on existing nuclear-weapons agreements, and that Washington needed to create far greater and more sophisticated strategic capabilities to reestablish credible nuclear deterrence.

The U.S. government has had few bureaucratic streetfighters tougher than Rumsfeld—and even fewer who could think creatively at the 30,000-foot level.

Leaving the Pentagon following Ford’s 1976 loss to President Jimmy Carter, Rumsfeld moved into private business and made yet another successful career. During this period, he refined and elaborated his thinking on strategic issues, working in particular on national missile defense, which would allow the United States to escape the logic of mutual assured destruction. Missile defense would ultimately prove fatal to the 1972 Anti-Ballistic Missile (ABM) Treaty, which epitomized the very arms-control ideology Rumsfeld rejected. The outraged howls of the liberal establishment against such thinking reverberate to this very day.

In a phrase that seemed deeply embedded in the brains of both the U.S. foreign-policy elite and that of the Kremlin, the ABM Treaty was the “cornerstone of international strategic stability.” It was simply unthinkable that Washington would abandon a central pillar of the mutual assured destruction theory, namely that defense against a nuclear attack was a bad thing. Rumsfeld’s various efforts on this issue included, most notably, chairing the congressionally created Commission to Assess the Ballistic Missile Threat to the United States (now known as the “Rumsfeld Commission”) in the late 1990s. It was largely due to Rumsfeld’s work that presidential candidate George W. Bush campaigned in 2000 on the pledge that the United States should withdraw from the ABM Treaty.

In 2001, I was the U.S. State Department’s negotiator, charged (along with an inter-agency team) with extricating the United States from the treaty so we could defend ourselves against the real and growing threat of rogue states seeking deliverable nuclear weapons. Rumsfeld was doing his second stint as secretary of defense. After one National Security Council meeting, during which Bush reviewed our strategy, Rumsfeld pulled me aside with a cheerful warning: “Don’t screw up,” or something close to that. I kept it in mind. Dick Cheney, who had been Rumsfeld’s aide during the early Nixon administration and was by then vice president, made sure I heeded Rumsfeld’s warning. Fulfilling his campaign promise, Bush accomplished what some considered impossible and announced in late 2001 that the United States would withdraw from the ABM Treaty, against the vehement opposition of then-Sens. Joe Biden and John Kerry—and all the other usual suspects. It took raw will power for Bush, Cheney, and Rumsfeld to lead the charge against the doctrine of mutual assured destruction and its embodiment in the ABM Treaty. Successfully burying that misguided, dangerous document and its underlying theory will amaze conventional minds for years to come.

The September 11 attacks obviously dominated everything else in 2001, showing how woefully unprepared the United States had been for such terrorist atrocities. That morning, I could see the fire and smoke from the Pentagon, which lay across the Potomac from my State Department office. I will never forget Rumsfeld and his top aides, during a secure video conference less than an hour later, explaining that they were leaving their conference room because the burning building required moving somewhere with better ventilation.

The next years brought key historical events, including the successful invasions of Afghanistan and Iraq. You read right: successful invasions that overthrew the Taliban in the former and Saddam Hussein in the latter. That’s what Bush ordered and Rumsfeld’s Department of Defense delivered. Years of travail and controversy followed, all too well understood by Rumsfeld. But he never strayed from his conviction that the United States’ purposes were right, its missions necessary, and the risks manageable.

The U.S. government has had precious few bureaucratic streetfighters tougher than Rumsfeld—and even fewer who could think creatively at the proverbial 30,000-foot level. He had few, if any, easy days during his senior national security service. Fortunately for the United States, he was more than up to the job.