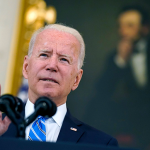 Republicans are suddenly tougher than Democrats on Russia and China. The Trump era is truly over.

This article appeared in The Wall Street Journal on July 27, 2021. Click here to view the original article.

The politics of American foreign policy are reverting to their modern norms, illustrated by two recent Biden administration decisions and the attendant reactions. Donald Trump’s idiosyncrasies and the Democratic opposition produced some aberrations in the traditional positions of the two major parties, confounding allies and adversaries alike. Now, Republicans and Democrats are essentially reverting to the status quo ante.

These statements amounted to little more than what diplomats call “a stiff note.” More significantly, at least publicly and to date, there have been no retaliatory measures: no sanctions (unlike after recent cyberattacks by Russian entities) and no cyber response. The White House press briefer uttered the palpably false words “We are not holding back.” Of course they were, and Beijing understood it.

Mr. Biden also acquiesced to the completion of Russia’s Nord Stream 2 pipeline. The administration had previously said it opposed the project, even while waiving sanctions that could have crippled it. (Mr. Trump also had opportunities to stop the pipeline, but didn’t.) Mr. Biden’s final surrender means the U.S. is done trying to stop Nord Stream 2.

In both cases, there was immediate criticism. Republicans were dismayed by Mr. Biden’s flaccid answer to China’s cyberattacks and incandescent about Nord Stream 2. Had these same decisions been made by Mr. Trump, Democrats would have taken the offensive, accusing Mr. Trump of coddling Xi Jinping and reprising the clamor about “Russian collusion.”

In reality, the two political parties are simply returning to their traditional stances. Mr. Trump’s posture on Beijing was confused and inconsistent, from yearning for “the biggest trade deal in history” to imposing tariffs when the chimerical deal disappeared. He criticized the Wuhan origin of the coronavirus when politically advantageous but never censured China on North Korea, Hong Kong, human rights or much else.

Mr. Trump didn’t take a “hard line” on China; he was as opportunistic there as on everything else. No one can say with confidence what a second Trump term would have brought. Nonetheless, seeing Mr. Biden’s weakness, Republicans re-emphasized their opposition to China’s growing economic, political and military threat.

Even under Mr. Trump’s helter-skelter decision making, his Republican advisers repeatedly recommended strict sanctions against Russia, which he often approved, albeit unhappily. Republican officials also recommended and obtained U.S. withdrawal from the Intermediate-Range Nuclear Forces and Open Skies treaties, and a tough negotiation approach to any renewal of the New Start Treaty. Mr. Trump’s absence empowers congressional Republicans to express themselves with full force against Mr. Biden’s supine position on the pipeline.

One might say these aren’t real policy realignments, only evidence of the opposition doing what comes naturally: opposing. Internal divisions also remain, primarily among Democrats, facing their left wing’s foreign-policy onslaught, especially regarding Israel. Nonetheless, Mr. Trump’s influence is receding in Republican national-security circles, and it won’t be back, as further demonstrated by issues beyond China and Russia.

Mr. Biden’s decision to withdraw all U.S. forces from Afghanistan, thereby effectively implementing what Mr. Trump wanted and would certainly have done in a second term, has met with near-total Republican rejection in Congress. This is a reversion to the norm.

On North Korea, no clear Biden policy has yet emerged. In public, his approach so far looks much like President Obama’s “strategic patience,” which led to eight years of Pyongyang’s progress toward deliverable nuclear weapons. At least it comes without Mr. Trump’s showboating summit diplomacy, which did little but provide photo-ops to one of the world’s worst dictatorships.

Ironically, on issues where Mr. Trump closely followed traditional Republican lines—Iran, Venezuela and Cuba—Mr. Biden is having trouble reverting to the Democratic norm. Despite frantic efforts to rejoin the 2015 Iran nuclear deal, the president may be realizing how abject his surrender to Tehran would be, and may be backing off. And if he wants a prayer of carrying Florida in 2024, Cuba and Venezuela policies that look like Mr. Obama’s are sure losers.

Only six months into Mr. Biden’s term, politics are reverting to familiar contours. Mr. Trump is increasingly visible only in the rearview mirror.