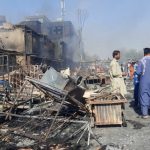 This article appeared in The Daily Telegraph on August 18, 2021. Click here to view the original article.

The Taliban takeover of Afghanistan have left many wondering whether the “20 year war” was worth the blood spilt. Here, John Bolton, former National Security Adviser to President Donald Trump, gives his view

Using military force to destroy al Qaeda’s Afghan bases and oust the Taliban from power was necessary, legitimate and beneficial to the United States, not to mention Afghanistan and the world at large. No subsequent terrorist attacks have come close to matching the lethality and complexity of 9/11’s terrorism, a point nearly forgotten not twenty years after the dies irae.

An almost-unthinkable but very real tragedy, however, is that too many wrongly concluded thereby that radical Islamic terrorism had been defeated, not to rise again as a threat either in remote south-central Asia or globally. They are dangerously wrong.

America has not been “at war” in Afghanistan in any meaningful sense for many years, no more than it has been “at war” in Germany, Japan or other countries where U.S. forces remained after World War II until now. Rhetoric about “ending endless wars” and “war weariness”; the fantasy lure of “nation building” that rested on inaccurate and ahistorical analogies to the Marshall Plan; and the sequence of Donald Trump’s aberrational presidency, followed by Joe Biden, who never understood the strategic importance of a significant U.S. military presence in Afghanistan, have all wrought this unhappy moment.

Withdrawing U.S. and allied troops from Afghanistan is causing even greater tragedies: enabling a Taliban return to power, with globally-threatening terrorist bases likely flourishing there once again soon; shielding and thereby enhancing Iran’s nuclear menace; and threatening the radicalization of a nuclear-armed Pakistan.

Countless foreigners (and Americans) hope Washington’s withdrawal from Afghanistan encourages other U.S. drawdowns in the Middle East (already underway) and worldwide. Those declinists should think long and hard about the implications of a real “coming home” of American power. They’re going to miss us when we’re gone. So will we.