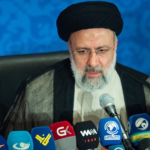 This article appeared in The Daily Telegraph on August 10, 2021. Click here to view the original article.

Concomitantly, Joe Biden’s efforts to beg the US’s way back into the 2015 Iran nuclear deal, the “Joint Comprehensive Plan of Action”, are imploding. Biden has his own hard decisions to make. Not only is the JCPOA at death’s door, he has done little to counter Tehran’s conventional military aggression and support for terrorism. So fixed was his administration on resurrecting the flawed deal, it has no apparent Plan B.

The ayatollahs are on the move, and the West is spectating. Johnson, however, can play a key role; among the leaders of Europe’s three JCPOA signatories, he faces the fewest political constraints. Germany’s Angela Merkel ends her long chancellorship in just months, and France’s Emmanuel Macron faces stiff challenges in next year’s presidential elections. By contrast, Johnson’s majority would support a harder Iran line than what he inherited in 2016 as foreign secretary.

Biden has assured America’s friends he wants to strengthen alliance ties, not weaken them, Trump-style. But on the Iran issue, competing alliances have been at odds. Washington’s Middle East partners (Israel and the Gulf Arab states) are deeply threatened by Iran’s nuclear-weapons and ballistic-missile programmes, as well as by its support for terrorism and its belligerent Quds Force. On the diplomatic scoreboard so far, European allies have done better under Biden than those in the Middle East, which Biden prefers to downplay.

No such luck. Iran is not going away, and neither are the Taliban, al Qaeda or Isis. The central strategic objective, therefore, remains, as for decades, preventing Iran from getting nuclear weapons. Conveniently, this has been the declared objective of all concerned, although mostly rhetorically for some given that the JCPOA was never going to achieve that goal. By bending their knee to Iran’s insistence that it retain and expand its uranium-enrichment capabilities, the “EU-3” (before the UK Brexited) guaranteed failure.

What Western leaders must do, and where Johnson could be pivotal, is reconcile the disparate approaches among the governments determined to prevent a nuclear Iran. Israel will not watch idly as its nuclear and missile programmes advance. A litany of fires, explosions, inconvenient accidents and more, which may or may not be Israel’s work, is already slowing Iran down, albeit not enough. With or without Bibi Netanyahu as prime minister, Israel’s vigorous strategy is unlikely to subside.

The ayatollahs deserve no moral equivalence in attacking civilian shipping because Israel is trying to eviscerate Iran’s nuclear-weapons programme, one of whose objectives is a nuclear holocaust for “the Little Satan”. If Israel’s critics have trouble getting this point, they should note that Gulf Arab states are granting Israel full diplomatic recognition while Jerusalem shreds Tehran’s nuclear establishment.

Iran’s real threat is not just its parade of malign activities, but the regime itself. Waiting for the Islamic Revolution to cool has proven a fool’s errand. Moreover, no Western state can afford to pretend that the Middle East must take a back seat because we need to deal more extensively with the 21st century’s existential threat, China. In fact, Beijing’s menace is now palpably interwoven with the Iran threat, given China’s enormous energy needs and its willingness to satisfy them from Iran.

The answer is for the anti-Iran coalition to agree that US and Israeli economic sanctions must remain in place, and be enlarged to, and be more strictly enforced by, European and Arab states. Acting unilaterally, Washington’s “maximum pressure” campaign for three-plus years has had huge economic and political impacts. Anti-regime forces inside Iran are increasingly active and effective, despite brutal repression. Discreetly assisting the opposition and exploiting the fissures among the ayatollahs, who have not been so vulnerable since 1979, could precipitate their fall.

The alternatives have failed. Ready for something new, Boris?