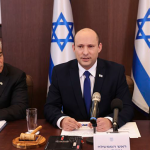 This article appeared in The Daily News on August 3, 2021. Click here to view the original article.

Is it possible that Israel’s fragile governing coalition and Joe Biden’s administration will rejoin the UN Educational, Scientific and Cultural Organization (UNESCO)? Apparently so, according to recent media reports.

If true, such a policy shift would be a significant mistake in dealing with the United Nations generally, and a dramatic repudiation of hard-fought victories against efforts to have “Palestine” declared a state by the UN rather than through direct negotiations with Israel.

Perhaps Yair Lapid, the left-of-center foreign minister of Israel’s morganatic, bare-majority coalition, doesn’t see any problems ahead. What is stunning is that conservative Prime Minister Naftali Bennett has acceded to Lapid’s initiative, risking the ire of his own supporters, not to mention Bibi Netanyahu’s Likud Party, probing continuously and aggressively for mistakes potentially fatal to Bennett’s shaky government.

Equally incomprehensible is why Biden, beset by threats ranging from COVID-19 to rising inflation from huge federal spending increases, would seek to resurrect the UNESCO issue. Even if he did rejoin, Congress would certainly reject paying renewed contributions to UNESCO, much less over $500 million in arrearages America purportedly owes. Biden would face a massive political struggle without the prospect of any substantive accomplishment.

The UN’s fundamental basis is that is an organization of member states. Accordingly, because Washington almost invariably opposes politicizing the work of UN technical bodies, it has consistently rejected efforts by non-states to join the UN and its specialized agencies.

UNESCO has long been among the most politicized UN organizations. Ronald Reagan withdrew America in 1983 because of UNESCO’s systematic anti-U.S. biases, and concern for its rampant anti-Semitism. Indeed, even as the Cold War later wound down, George H.W. Bush refrained from rejoining UNESCO, largely due to its deeply embedded anti-Israeli bias.

George W. Bush’s decision to return proved the error of thinking UNESCO capable of reform. Inevitably, despite clear forewarning of the disaster it was courting, UNESCO admitted the Palestinian Authority (PA) as a member state in 2011. Like its predecessor Palestine Liberation Organization, the PA palpably fails to meet customary international law requirements for “statehood.”

UNESCO’s misbegotten decision triggered U.S. statutory obligations to stop funding any UN agency that accorded the PA “state” status. This statute’s origin is an iconic marker of the longstanding, bipartisan, U.S. opposition to Palestinian efforts to create facts on the ground in the UN’s friendly corridors. In 1989, over U.S. and Israeli opposition, the PLO tried to join the World Health Organization. Then-Secretary of State Jim Baker pledged to advise President Bush that the U.S. “make no further contributions, voluntary or assessed, to any international organization which makes any change in the PLO’s status as an observer organization.”

Baker’s warning stopped the PLO cold. Congress subsequently enacted his warning into law, thereby binding subsequent administrations. Nonetheless, in 2011, this plain language was ignored by all concerned: Obama, the PA and UNESCO’s membership. Even afterward, when Washington, as required, terminated funding, UNESCO failed to get the point. Accordingly, in 2017, Secretary of State Rex Tillerson announced America’s second withdrawal. Given this history of critical Republican attitudes on UN funding and the PA, and significant splits within the Democratic Party on the issue, Biden would be politically myopic to pick this fight again.

So why is Israel raising it now? Axios reports that Lapid believes “Israel’s withdrawal from international forums over claims they were biased only made Israeli foreign policy less effective.” We can only hope this reporting is deeply flawed; if true it would reflect a stunningly naive worldview, unprecedented among Israel’s modern-era foreign ministers.

What next? Will Israel join Washington’s plan to rejoin the deeply flawed UN Human Rights Council? Under Lapid’s reported rationale, and presumably Biden’s as well, this is entirely possible. Created in 2006, the Council was intended to avoid repeating the anti-American, anti-Israel practices of its predecessor, the Human Rights Commission. The reform effort failed so badly, however, that Washington and Jerusalem voted against establishing the new Council, and, once established, the U.S. declined to join. Obama reversed this policy, successfully seeking American election to the new forum. Entirely predictably, the Council’s behavior was as bad as its egregious predecessor. Trump’s senior advisers, rightly concluding there was no prospect for the Council to improve, unanimously recommended withdrawal, which occurred in 2018.

UNESCO membership might well be a non-event but for the evidence it provides of people’s views on larger issues. In “A Man for All Seasons,” Thomas More says scornfully, “it profit a man nothing to give his soul for the whole world….But for Wales?” We can say here, that it never profits either America or Israel to compromise their vital national interests.…But for UNESCO?