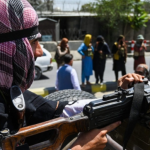 There was an alternative to following Trump’s policy. Now our enemies will look to exploit our weakness

This article appeared in The Daily Telegraph on August 16, 2021. Click here to view the original article.

The rapidity with which the Taliban has effectively seized control of Afghanistan has stunned and embarrassed the Biden administration. Already a tragedy for the Afghan people, the situation will worsen, quite possibly catastrophically so. The Taliban has captured every major city, and President Ashraf Ghani has fled the country. The Afghan collapse is either a major intelligence failure or proof of congenital wishful thinking by Joe Biden and his advisers, probably both.

Worse, the collapse of Afghanistan’s national military is a debacle for America, Britain and our allies, posing a potential new world-wide threat. If, as now seems certain, al Qaeda, Isil and other terrorist groups take sanctuary in the country, we will have effectively returned to a pre-9/11 terrorist environment. 9/11’s twentieth anniversary was already heavy on our minds, and the confluence of events only makes the memories starker.

Observers had suggested ways to mitigate the damage caused by Biden’s withdrawal decision, or partially reverse it. They are now dreams. There was no chance Biden would reverse course, and now it is impossible. Iacta alea est.

Ironically, Biden’s withdrawal policy is virtually indistinguishable from Donald Trump’s, which was well underway when he left office. On Saturday, Biden himself admitted he was finishing the implementation of what Trump started. Biden claimed he had only two options: follow Trump’s blueprint or else considerably increase US combat forces in Afghanistan. This is a strawman argument, palpably false.

By August 2019, Trump was determined to leave this “endless war”. He hoped to exit before the 2020 elections, but he failed because of his perpetual intellectual disarray. So desperate was Trump to gain credit for the withdrawal, he wanted to invite the Taliban to Camp David to seal the deal, which his advisers viewed as near sacrilege. Trump was diverted from this theatre only because of a Taliban attack on a Nato convoy in Kabul.

Hoping to salvage his reputation from Trump’s ashes, former secretary of state Michael Pompeo has tried to distinguish Trump’s performance from Biden’s. Pompeo defends Trump’s withdrawal decision while criticising Biden for poorly executing it. Arguing that Trump’s plan was “conditions based”, Pompeo contends that US and Nato forces would have responded forcefully had the Taliban violated the deal.

Maybe. Maybe not. In the end, Biden, like Trump, had wanted to withdraw, and he did. History will label the US withdrawal “the Trump-Biden policy”.

Sadly, there is further irony here, and cruel irony indeed. After the US-led coalition overthrew the Taliban in 2001, Americans and others launched, mistakenly, a massive nation-building campaign. Today, this effort to show selflessness has been turned against the necessity of remaining in-country for strategic reasons. Many ask, reasonably, why we have spent so much to reshape Afghan society and construct a viable military, but have so plainly failed.

Others complain that the Afghan army folded without a fight. Kabul’s army was well-equipped and trained, but its morale was destroyed by the Trump-Biden withdrawal decisions, all of which was entirely predictable. In Afghanistan, we needed merely a partner military that could keep the Taliban sufficiently under control that Isil and al Qaeda did not obtain secure-enough sanctuaries to threaten us with renewed attacks. We didn’t need military perfection; a strong central government; or Afghanistan converted into a central Asian Switzerland. Today, this realisation comes too late.

The most fundamental mistake, which Biden reiterated on Saturday, is the notion we have been fighting in an Afghan civil war. To the contrary, we have been fighting a Western war against terrorists who happen to be in Afghanistan. Did Biden really believe we could leave it to Afghan surrogates to defend our vital interests? If our surrogates fail, as they have done, do we simply suffer the consequences of al Qaeda, Isil, and others conducting renewed attacks against us? We should certainly have others, like the Afghans, fight with us against the terrorists, and we did. But their inadequacy does not mean we throw up our hands and depart, giving the terrorists free rein.

Finally, we hear constantly that we have “been there for 20 years,” it is America’s “longest war,” and “the endless wars must end”. This is simple-minded, albeit politically appealing. We have believed correctly that “forward defence” against the Taliban in Afghanistan is better than waiting to defend against terrorists in our own streets and skies. Unfortunately, our leaders have failed to explain why “forward defence” is the best way to protect our innocent civilians, although the process may take a very, very long time. Constantly predicting it will be over in a year or two has been counter-productive. Our side doesn’t get to decide when the terrorists give up. Our publics would understand this cost-benefit analysis if leaders properly explained it. They have before, in the Cold War, not for merely 20 years, but for over 45 years before the Soviet Union collapsed.

Proponents of withdrawal missed the point. We entered Afghanistan for core strategic reasons: to remove the Taliban government and destroy al Qaeda. We had substantial but incomplete success. We remained for equally compelling reasons: to prevent a recurrence of terrorist capabilities to strike America and its allies, and to watch more carefully developments in Pakistan and Iran. We do not want Pakistan to succumb to extremists similar to the Taliban, which would put an arsenal of nuclear weapons in the hands of terrorists. In Iran we worry about the terrorist ayatollahs still avidly pursuing that same nuclear capability.

For the West more broadly, the Afghan withdrawal dangerously impugns our worldwide resolve. After four aberrant years of Trump, Biden pledged that “America is back” and would provide competent leadership. Having followed Trump’s erroneous exit policy, and then bungled it, Biden’s credibility also lies in tatters. Beijing, Moscow, and Tehran, are fully alert, looking for every opportunity to exploit US weakness. Doing good by the Afghans was a substantial collateral benefit of America, Britain and others pursuing our strategic interests, but it was not central to why we were there. Now our departure will imperil us all. This is a strategic lesson, which, I fear, we will learn at great cost.