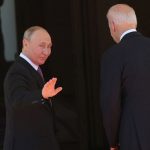 This article appeared in The Wall Street Journal on August 30, 2021. Click here to view the original article.

America’s retreat from Afghanistan is ending tragically—and that has sweeping strategic implications. One major misjudgment underlying the “ending endless wars” mantra was that withdrawing affected only Afghanistan. To the contrary, the departure constitutes a major, and deeply regrettable, U.S. strategic realignment. China and Russia, our main global adversaries, are already seeking to reap advantages.

They and many others judge Afghanistan’s abandonment not simply on its direct consequences for global terrorist threats, but also for what it says about U.S. objectives, capabilities and resolve world-wide.

In the near term, responding to both menaces and opportunities emanating from Afghanistan, China will seek to increase its already considerable influence in Pakistan; Russia will do the same in Central Asia’s former Soviet republics; and both will expand their Middle East initiatives, often along with Iran. There is little evidence that the White House is ready to respond to any of these threats.

Over the longer term, Beijing and Moscow enjoy a natural division of labor in threatening America and its allies, in three distinct theaters: China on its periphery’s long arc from Japan across Southeast Asia out to India and Pakistan; Russia in Eastern and Central Europe; and the Russian-Iranian-Chinese entente cordiale in the Middle East. U.S. planning must contemplate many threats arising simultaneously across these and other theaters.

This underscores how strained our defense capabilities are to protect our far-flung interests, especially given the unprecedented domestic spending demands President Biden is now making. Washington’s most important task, therefore, is somehow to secure significant increases in defense budgets across the full threat spectrum, from terrorism to cyberwar. Diplomacy alone is no substitute.

Xi Jinping will be unimpressed by Mr. Biden’s assertion that America needs to end military activities in Afghanistan to counter China more effectively. Instead, Beijing has new opportunities: shoring up its interests in Afghanistan and Pakistan; protecting against the spread of Islamic terror into China; and increasing efforts to establish hegemony along its periphery, especially regarding Taiwan, the South China Sea and India.

These initiatives fit seamlessly into Beijing’s existential threat to the West, extending well beyond our Afghan debacle. By contrast, Washington is floundering in tactical maneuvering and improvisational responses to particular Chinese ploys. Afghanistan is the urgent impetus to marshal our deeper conceptual and strategic thinking; while doing so, we can immediately seize several points of policy high ground. To eliminate ambiguity about our Taiwan defense commitment, for example, we should station military forces there. Theaterwide, we need those budget increases to boost our naval presence in the East and South China seas, thereby establishing deterrence and countering Chinese sovereignty claims.

Our defense relations with India, Vietnam and others must intensify. The scope of the “Quad” (India, Japan, Australia and the U.S.) should expand dramatically to include collective-defense issues and the Quad itself should consider expanding. We also must increasingly hold China accountable for its dangerous policy of proliferating ballistic-missile and nuclear technology to the likes of Pakistan and North Korea.

Mr. Putin sees disarray in Europe, which fears the resurrection of endemic conflict, largely because it fears America faltering, even substantially withdrawing from world affairs. Although Presidents Trump and Biden don’t constitute a trend—the former was an aberration; the latter is merely a typical Democrat—Mr. Biden’s failure to warn North Atlantic Treaty Organization allies of his Afghan exit shattered already weak confidence levels. The inevitable calls for a larger “European” politico-military role will meet the fate of previous efforts. The European Union can never be a global geostrategic player because it habitually deploys more rhetoric than resources.

That leaves NATO, which Mr. Biden had eased back toward complacency, only to jilt the allies over Afghanistan. Instead of blaming Washington for being too interventionist and then for not being interventionist enough, Europe needs to decide whether it prizes collective self-defense in NATO seriously, or merely prizes dabbling in it. When Germany and others match their defense capabilities with their economies, their opinions will matter. While waiting, the U.S. should work with sub-NATO coalitions, mostly Central and Eastern Europeans, and threatened non-NATO countries just beyond, to counter Mr. Putin’s imperial instincts. Our force posture in Europe can be adjusted accordingly.

In the Middle East, Iran is China’s oil supplier of choice and Russia’s partner in bolstering Syria’s Bashar al-Assad. For Beijing and Moscow, Tehran is a surrogate for destabilization work and a foil to expand their influence throughout the region, recently demonstrated by the military-cooperation agreement between Russia and Saudi Arabia. Riyadh is hedging against U.S. disapproval and a possible Obama-style alignment with Tehran. Gulf Arabs fear America’s Afghan withdrawal could foreshadow the same in Iraq, or even from major U.S. air and naval bases in their countries. Who wouldn’t hedge?

Washington should emphatically not rejoin the 2015 Iran nuclear deal. That part is easy, although the Biden administration still doesn’t get it. The key lies in recognizing that Iran’s objectives are fundamentally contrary to America’s, Israel’s and most of the Arab world’s. Only changing Tehran’s government stands a chance of reducing threats across the region, which is the last thing China and Russia want.

Sadly for those believing withdrawal from Afghanistan was a one-off decision with limited consequences, the world is far more complicated. The results are already deeply negative, and China and Russia are invested in making them worse. Over to us.