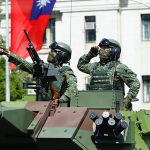 This article appeared in The Wall Street Journal on October 21, 2021. Click here to view the original article.

China’s threat to Taiwan is real, not hypothetical, as recent incursions into the island’s air-defense zone demonstrate. To counter Beijing’s renewed belligerence, a successful strategy must go beyond eliminating the “strategic ambiguity” over whether the U.S. will come to the island’s defense. A successful strategy will require clarifying Taiwan’s status, its critical place in Indo-Pacific politics, and its economic importance globally. The U.S. military contribution to Taiwan’s security is crucial, but it requires strong political support here and abroad.

It begins by affirming that Taiwan is a sovereign, self-governing country, not a disputed Chinese province. It meets international law’s criteria of statehood, such as defined territory, stable population and the performance of normal governmental functions such as viable currency and law enforcement. Washington, Tokyo and others would be entirely justified to extend diplomatic recognition, and its attendant legitimacy, to Taipei.

The 1972 Shanghai Communiqué, the foundational statement of current U.S.-China relations, is effectively dead. The communiqué says that “the United States acknowledges that all Chinese on either side of the Taiwan Strait maintain there is but one China and that Taiwan is a part of China,” and “doesn’t challenge that position.” Beijing warped these words to mean “one China run by Beijing,” a formulation the U.S. never accepted.

The reality the U.S. acknowledged in 1972 no longer exists. Taiwan’s National Chengchi University has polled the island’s people about their identity for 30 years. Between 1992 and 2021, those identifying as Taiwanese rose to 63.3% from 17.6%; those identifying as Chinese fell to 2.7% from 25.5%; those identifying as both Taiwanese and Chinese fell to 31.4% from 46.4%. (Some 2.7% didn’t respond, down from 10.5%.) The “silent artillery of time,” as Abraham Lincoln called it, will likely continue these trends. Taiwan’s citizens have made up their own minds: There is no longer “one China” but “one China, one Taiwan,” as Beijing has feared for decades.

Broader recognition of Taiwan’s status as an independent state would be extremely helpful in expanding politico-military alliances to buttress the island’s defenses against China. Yet Washington’s support may be insufficient to deter Beijing from attempting to subjugate Taiwan (or near-offshore islands like Quemoy and Matsu). Formal or informal alliances that include Taipei would show Beijing that the costs of belligerence toward Taiwan are significantly higher than China may expect.

One step would be forming an East Asia Quad, consisting of Taiwan, Japan, South Korea and America, complementing the existing Japan-India-Australia-U.S. Quad. Japan should welcome this development. Its decision makers increasingly understand that a Chinese attack on Taiwan is an attack on Japan. Both are part of “the first island chain” separating the mainland from the broader Pacific, and their mutual security is inextricable.

It would be harder to persuade South Korea to join in such an effort due to historical animosities toward Japan and other factors, but its people are nonetheless aware of the consequences of Taiwan falling to China. The 2022 presidential election is an opportunity to debate whether to stand with its neighbors or risk eventually living under Greater China’s suzerainty. Vietnam, Singapore, Australia and Canada could join this Taiwan-centric grouping in due course.

Similar cooperation with Pacific island states would also enhance Taiwan’s reputation as a good neighbor. In addition, American and Taiwanese information statecraft in the Indo-Pacific and globally should expose China’s hypocritical behavior on climate change and Covid and its repression of Uyghurs, Hong Kong and religious freedom. Failure to counter Beijing’s extensive influence operations hamstrings efforts to constrain China and protect Taiwan.

Few Americans appreciate how critical an economic partner Taiwan is, especially its semiconductor manufacturing industry and its extensive trade links throughout the Indo-Pacific, all of which could support enhanced politico-military ties. Economic issues are important for regional countries and Europeans, who may be less willing to engage in military action. These countries should be reminded of China’s threat, including Beijing’s weaponizing telecommunications companies like Huawei and ZTE and its brutality in taking Canadians hostage in retaliation for the legitimate arrest of Huawei CFO Meng Wanzhou.

More military assets supporting Taiwan are critical but potentially futile without a fuller American strategic vision, with buy-in from citizens and other like-minded countries. That vision must be broad, persuasive and implemented without delay, to ensure the sustained popular support needed to prevail.