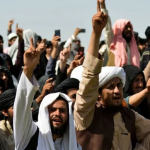 This article appeared in The Hill on October 10, 2021. Click here to view the original article.

Washington’s conventional wisdom held in recent years that Americans wanted to “end endless wars” around the world, particularly in Afghanistan. Public-opinion polling repeatedly found at least plurality support for withdrawing U.S. forces from “our longest war,” seconded by Presidents Trump and Biden, among others.

It was hardly a subject of debate among media commentators and Washington insiders. Who could disagree, except a few irreconcilables? Democrats certainly didn’t question this received truth, nor did many Republicans, bending to Trump’s influence.

The conventional wisdom and its arguments were simple: Why did we invade 20 years ago, wasting lives and treasure? The Afghans should defend themselves. The Taliban has moderated, craving acceptance by “the international community.” The global terrorist threat has receded. Our obsession with the Middle East should end so we can “pivot” to Asia. Time to focus on “nation building” at home, and on climate change.

Then came the actual withdrawal. The swift collapse of the Afghan government and its national army, the Taliban’s return to power in Kabul and riveting scenes of death and terror amid frantic efforts to evacuate U.S. citizens and Afghans who had worked with us for two decades were too stunning to ignore. Washington’s conventional wisdom encountered reality — and dissolved as quickly as the Afghan military.

But conventional wisdom is nothing if not resilient. It quickly concluded that while Americans overwhelming disapproved of how the withdrawal was executed, they nonetheless still concurred with Biden and Trump on the underlying withdrawal decision.

There is, however, strong reason to believe that conventional wisdom has stumbled again, as Americans begin to realize that withdrawal has more profound strategic consequences than simply removing U.S. troops.

Recent congressional hearings, with more coming, have informed the rethinking prompted by millions of television screens portraying our withdrawal’s fully predictable results. For starters, the Taliban provided ample evidence that it had neither modernized nor moderated, naming no women to its new government. Al Qaeda proved to be more numerous and more integrated into the Taliban than even the worst-case United Nations and other studies indicated. Terrorists across the Middle East took heart from the Taliban’s “victory,” and foreign jihadists began returning to Afghanistan. Reports of retaliation and barbarism by Taliban fighters emerged from the few Western journalists still in-country.

For years, presidents in both parties (Obama, Trump, Biden) failed to make the case for remaining in Afghanistan. They apparently did not believe we were safer deploying forces there rather than merely defending against renewed terrorist attacks in the streets and skies over America.

It stands to reason that when citizens weren’t hearing leaders advocate and adequately explain “forward defense,” they didn’t support it. Yet this was the basic logic underlying the Pentagon’s long-standing view that America’s military presence in Afghanistan was a critical insurance policy for sustained protection of the homeland. It was not just the military capabilities deployed there – and NATO’s complementary train-and-assist mission – but the intelligence-gathering program that relied upon the military’s infrastructure and protective capacity to do critical work on terrorism in Afghanistan and the dangers emanating from Pakistan and Iran on its borders.

These were arguments repeatedly put to both Trump and Biden. Contrary to Biden’s glib assertions, senior U.S. military leaders almost unanimously opposed withdrawing all American forces. Equally important, the destructive consequences of the Trump administration’s negotiations with the Taliban, producing the February 2020 Doha agreement, were not well-understood among even Washington policymakers, let alone the general public.

Joint Chiefs Chairman Gen. Mark Milley and CENTCOM Commander Gen. Frank McKenzie have now testified before Congress that the U.S.-Taliban agreement had a devastating impact on the spirit of both the Afghan military and the civilian government. Trump’s policy, adopted by Biden, over time demoralized and delegitimized the very Afghan government which America had been instrumental in creating two decades ago. By effectively de-recognizing that government, we caused the collapse in morale that swept away years of training and equipping of Afghan forces.

Thus, while many withdrawal advocates point to the rapid collapse of Afghanistan’s government as buttressing their argument to leave, the collapse was, in fact, a self-inflicted wound by American presidents desperate to reap the perceived political benefits of pulling out.

Looking ahead, now that America’s military departure from Afghanistan is a fact and not just a hypothetical, the key political question is whether public opinion grasps the renewed threats from terrorism thereby created. To be sure, U.S. national-security policy must be based on our fundamental interests, not on domestic U.S. politics, and certainly not on the vagaries of public-opinion polling. Polling commissioned by my Super PAC, however, points to significant shifts in public attitudes after watching and debating the withdrawal and its aftermath in real time. (The polling was conducted September 16-18, covering 1,000 likely voters, with a margin of error of +/- 3.1% at a 95 percent confidence level.)

Asked whether pulling out our forces made the United States more or less safe from terrorism, 52 percent said, “less safe,” 6 percent said “safer” and 37 percent said “no difference.” By more than a two-to-one majority (56 percent to 26 percent), Americans agreed that “withdrawal from Afghanistan wasn’t a good idea that was botched, it was a bad idea” because the Taliban could provide al Qaeda and other terrorists with bases of operations. A 52 percent majority believed we should have left some troops behind or not withdrawn any at all, compared to 33 percent who said all troops should have been withdrawn. And 61 percent believed our failure in Afghanistan would encourage jihadists around the world, making them more likely to attack the United States, compared to 29 percent who disagreed.

These are sobering numbers and, if sustained, represent a thorough rejection of the previous conventional wisdom. Trump himself seemed to grasp this new direction of public opinion; at a Sept. 25 rally in Perry, Ga., referring to his own “plans” had he been reelected, Trump said “we were going to occupy Bagram [air force base] for a long time to come, and it would’ve been so good.” Typically, Trump either ignored or did not understand that staying at Bagram “for a long time” meant not fully withdrawing. But Bagram was a good applause line at the Perry rally.

New hacking efforts show Russia undeterred by US actions
FDA panel could pave way for coronavirus vaccines for kids
The key conclusion today is that the consequences of the Afghanistan withdrawal are far from over, and events there and in the miasma of global terrorism will continue to command our attention. Biden will not be able to take a victory lap in the 2022 or 2024 elections for having ended one of the endless wars; instead, he will be explaining why America is once again more vulnerable to terrorism.

We may have left Afghanistan, but it has not left us. And neither have the terrorists.