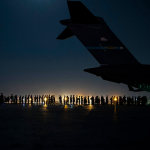 After overthrowing the Taliban government in Afghanistan in 2001, U.S. and NATO forces stayed in the country primarily to preclude the Taliban from regaining power and again providing sanctuary for terrorists threatening worldwide attacks. U.S. presidents voiced other reasons to remain, some important, some not. Mistakes were made and money wasted. The undeniable human cost was almost entirely caused by the terrorists’ continued barbarity.

For 20 years, no terrorist attacks against the United States emanated from Afghanistan. Tragically, this central reality became obscured by simplistic political sloganeering. Presidents either didn’t grasp or were unwilling to advocate a limited U.S. military presence to buttress Kabul’s elected government and keep the Taliban at bay. Those advocating withdrawal simply assumed the terrorist threat was immaterial, or preventable through unproven “over the horizon” strategies.

Before Congress last week, the Biden administration conceded that one rhetorical Maginot Line supporting withdrawal had fallen. Colin Kahl, the undersecretary of defense for policy, testified that both al-Qaeda and the Islamic State faction in Afghanistan known as Islamic State-Khorasan, or ISIS-K, have the “intent” to conduct terrorist attacks against the West. “We could see ISIS-K generate that capability in somewhere between six or 12 months. I think the current assessments by the intelligence community is that al-Qaeda would take a year or two to reconstitute that capability.” So much for the Taliban’s credibility, having promised to prevent precisely this.

And so much for confidence in the threat’s immateriality, exemplified when Sen. Rand Paul (R-Ky.) asserted late last year that there was no “significant worldwide terrorist threat coming from Afghanistan.” The Taliban, al-Qaeda and ISIS-K must not have seen this news, or been aware of Donald Trump’s frequent insistence, as president, that they were far from America. Just two months after the departure of U.S. troops, new terrorist attacks in the United States could be only six months away.

Did the speed of the threat’s rise stem from the terrorists’ resilience or erroneous U.S. estimates of how much damage they had incurred? The question deserves close scrutiny. Whatever the explanation, the result is the same: The United States may not face another 9/11-scale attack immediately, but the terrorist threat has not moderated, and certainly not disappeared.

The Biden administration deserves credit for surprising candor, although Kahl’s testimony echoed the warnings that President Biden received before proceeding to withdraw, as Trump and President Barack Obama were similarly warned. Now, however, these troubling assessments are publicly buttressed by Biden’s own political appointee.

Biden’s long-standing over-the-horizon theory that we can mount successful counterterrorism operations from far distant platforms, with essentially no in-country presence, will now be tested. Unfortunately, this conjecture is likely to be merely a second rhetorical Maginot Line.

Without even a bare-bones U.S. counterterrorism platform in Afghanistan, intelligence on threatening activities will be enormously difficult to come by. Much of our superb technical capability for surveillance will be irrelevant. Al-Qaeda and ISIS-K will not be excavating deep silos to house nuclear-capable intercontinental ballistic missiles, like China, visible from space. Nor is eavesdropping possible when terrorists transmit truly sensitive information via the ancient but durable channel of couriers. Working with human agents, the best method against tightly knit organizations, requires in-person handling, not video conferences from Langley.

Obviously, inadequate intelligence makes long-distance strikes far more problematic, especially in remote, mountainous Afghan terrain. Pakistani help is a mixed blessing, as it has been for two decades, given the country’s Janus-like relationship with the Taliban and other terrorists. Nor is Moscow cooperating. Speaking virtually to a recent Tehran conference, Russian Foreign Minister Sergei Lavrov said, “We call on Afghanistan’s neighboring countries not to allow a military presence of U.S. and NATO forces that plan to move there after leaving Afghanistan’s territory.”

As we moved out, ostensibly to focus more intensely on China, China is moving in: by offering at Tehran to host next year’s ministerial meeting of Kabul’s neighbors, and by expanding investments and fostering mutually beneficial political understandings with the Taliban.

Nor should anyone believe that the current animosities between ISIS-K and the Taliban (joined by al-Qaeda, now deeply intertwined with the Taliban), are permanent. The Islamic State emerged from al-Qaeda, and the taxonomy of Islamist terrorists is not so rigid that alliances of convenience or even firm partnerships won’t emerge against the common enemy, namely the United States. Accordingly, a notion now circulating among some in the U.S. national security community supporting the Taliban against ISIS-K should be sharply rejected. The terrorists understand their own capacity for shifting affiliations, and so should we. They are all our enemies.

Today, post-withdrawal, Americans are unmistakably more vulnerable to terrorism’s threat. Adversaries and allies alike regard the abandonment of Afghanistan as a surrender, auguring how muted a U.S. response might be to crises far from Kabul. We can reverse this slide, but doing so requires recognizing that leaving Afghanistan was a major strategic blunder.