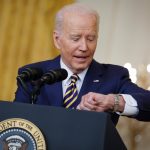 This article appeared in The New York Post on January 23th, 2022. Click here to view the original article.

President Biden’s first press conference in 10 months, on the eve of his inauguration’s anniversary, made news. But not the kind he wanted. Asked about Russia’s possible invasion of Ukraine, NATO’s lack of unity and the likely failure of economic sanctions to deter Vladimir Putin, Biden answered that “the idea that NATO is not going to be united, I don’t buy . . . It depends on what [Russia] does. It’s one thing if it’s a minor incursion and then we end up having a fight about what to do and not do, et cetera.”

In a stroke, Biden demonstrated he didn’t understand his own Ukraine policy, undercut Kiev’s government and people, and handed Moscow an engraved invitation to make a “minor incursion” into Ukraine.

That was bad enough, but further answers made his position even more unintelligible. He said, “and so, I got to make sure everybody is on the same page as we move along . . . But it depends on what [Putin] does, as to the exact — to what extent we’re going to be able to get total unity on the Rus — on the NATO front.”

Biden was correct that Putin “was calculating what the immediate . . . and the long-term consequences of [sic] Russia will be.” Right now, Putin has the initiative and a broad range of options. America and the West are reactive and disunited, as Biden all but admitted. Putin is following a strategic playbook encompassing the entire former Soviet Union and its Warsaw Pact “allies,” grounded on his 2005 precept that “the demise of the Soviet Union was the greatest geopolitical catastrophe of the 20th century.” The United States and NATO are answering this strategic threat only tactically. The West focuses on avoiding imminent hostilities, whereas Putin is seeking enduring hegemony over former Soviet territories. The White House still fails to comprehend that Putin need not conduct all-out invasion of Ukraine to win significant new advantages. Seizing “pro-Russian” areas, leaving a rump independent Ukraine or installing a Moscow-friendly government might be Putin’s real goal. Or he may make political or military moves elsewhere, in Belarus, Georgia or Kazakhstan for example, for which the alliance seems completely unprepared.

Even worse, Moscow is now suckering Washington into negotiations over “security guarantees” that weaken and divide NATO itself. Biden said, “NATO is not going to take in Ukraine anytime in the next few decades,” an astonishing unforced error. George W. Bush was ready in April 2008 to fast-track Ukraine and Georgia as NATO members, but Germany and France objected. Four months later, Russia invaded Georgia and in 2014 invaded Ukraine, annexing Crimea and seizing control over the Donbas. NATO has never admitted a country with unwanted foreign troops on its soil because that would effectively put NATO in a state of war with the occupying country. Of course, Russia is the aggressor in every case, with its “minor incursions” not just in Georgia and Ukraine but many others.

Russia creates an artificial crisis, then graciously accedes to resolve it by “accepting” precisely the objective it sought in the first place. Biden’s response is totally backwards, signaling willingness to discuss restrictions on Ukraine’s NATO candidacy and limitations on missile and troop dispositions near Russia’s borders, all key Kremlin demands. This is a major error, which will only prompt further demands. Russia, a consistent violator of international commitments, is the aggressor, not NATO, which has always been a purely defensive alliance. Geographic restrictions on NATO deployments endanger its members and benefit Russia, as Poland, the Baltics and other central Europeans fully grasp, even if Germany and France don’t. Russia has always feared violating a NATO member’s border, but weakening NATO resolve undermines even its historically successful defensive purpose, as Moscow clearly understands.

Playing small ball with Putin, as Biden is doing, will not durably protect Ukraine or other endangered states. Biden’s inadequate and now incoherent policy is not deterring Russian military action, and timidity simply incentivizes Putin to increase his demands. We risk a downward spiral of NATO concessions to avoid military conflict today, but which will only increase its likelihood soon thereafter.

Indeed, the situation may be so far gone Putin inevitably emerges the winner. The last hope is that Biden immediately reverses course and seizes the initiative and insist the Nord Stream 2 gas pipeline never operate until Russian troops leave any country that does not want them. Urgently required are more weapons and more NATO troops, not to fight but to train and exercise with Ukrainians, thereby increasing Moscow’s uncertainty and risk. So doing, of course, requires strength from the Europeans, especially France and Germany, that they may well lack.

This is Putin’s calculus, which Biden’s statements and last week’s negotiations did not change.

Time is on Putin’s side.

John Bolton was national security adviser to President Donald Trump from 2018 to 2019 and US ambassador to the United Nations from 2005 to 2006.