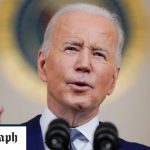 This article appeared in The Daily Telegraph on February 28th, 2022. Click here to view the original article.

President Joe Biden has explained why he failed to stop Russia’s invasion of Ukraine. He admitted that he had no idea what he was doing.

For months, Nato members and other governments thought they were working to deter Vladimir Putin from unprovoked aggression against Ukraine. The entire debate centred on choosing the most effective measures to convince Putin of the enormous consequences he and Russia would face if they resorted to military force.

Western leaders asked themselves what combination of preventative actions, threats of economic sanctions and even – in the minds of some, myself included – military force would be the most effective deterrent against a Russian invasion. What measures would persuade Moscow that the costs of any military action would be prohibitive, and more serious for Russia than any possible benefits?

Today, it is tragically obvious this collective effort failed. Last Thursday, at a White House press conference, we may have learnt why. Biden admitted that he never believed his threats to impose economic sanctions against Russia, and other steps the West might take if the Kremlin “further invaded” Ukraine, would deter Putin. The transcript is admittedly confused, as are so many of Biden’s unscripted remarks, but the meaning is clear.

A reporter asked: “Sir, sanctions clearly have not been enough to deter Vladimir Putin to this point. What is going to stop him?” Biden answered: “No one expected the sanctions to prevent anything from happening.” That was news to Washington and beyond, where people believed their deliberations and preparations were intended to do precisely that.

Translating Biden’s answers into sensible English leads to disturbing conclusions. Possibly, he simply doesn’t understand what deterrence is, and that it almost always includes credible threats of future punishment to affect an adversary’s current actions. It hardly inspires confidence in US leadership when its President fails to grasp the vital concept that kept the West safe during the Cold War’s nuclear standoff. Yesterday, Putin showed what he thought of Biden’s leadership by placing Russia’s nuclear deterrent on high alert – a provocative move, to say the least.

It may be that Biden was never confident Putin could be deterred, certainly not by threats alone. In that case, unless Biden was prepared to accept the inevitable devastation that an invasion of Ukraine would cause, he should have spared no effort to develop additional steps to prevent it. He did not, despite widespread, urgent advice that the sanctions he threatened were insufficient, and that real-time costs had to be imposed on Putin before he initiated military action.

The rubble in Biden’s mind is what it is. We should not await improvement. Instead, we immediately need new ideas that can change the direction of events and impact Putin and Russia.

The Ukrainian people are certainly doing their part. They are fighting hard and courageously, and their spirit is high. The contemptuous riposte of a small outpost in the Black Sea (“Russian warship, go f— yourself”) reminds us all of General McAuliffe’s equally defiant response to German demands he surrender during the Battle of the Bulge: “Nuts!”

One new idea is for Nato and EU countries simply to bar entry to any Russian citizens. Such a visa ban is clear, sweeping, immediate and readily enforceable. This would be far more shocking to Russians than sanctions against a small number of high-ranking targets. (Now under both Russian and Chinese sanctions myself, I can say confidently they don’t affect me at all. I only regret I didn’t have any assets Russia and China could have seized!) We could go further and expel Russians already in Western countries.

Some will say this is too harsh and disruptive. Really? Ask Ukraine what harsh and disruptive mean. The West has failed to deter Russia’s attack, and its post-invasion sanctions have so far been pinpricks, hardly even touching Russia’s critical energy sector. If there are better ideas than a visa ban, let’s get them out in public. Otherwise, we will just be sitting back watching the casualty lists get longer.

John Bolton is a former US national security adviser