This article appeared in The New York Post on February 27th, 2022. Click here to view the original article.

The Biden Administration has been explicit that it is pursuing a strategy of “graduated escalation” in imposing sanctions against Russia for invading Ukraine. This approach is virtually certain to be less effective in imposing economic hardship on Russia than a more robust effort, thereby prolonging Ukraine’s agony and postponing Russia’s isolation. Gradual escalation in economic warfare carries precisely the same risks as in kinetic warfare; the enemy has a say in both cases. Biden could be introducing us to to the Vietnam of economic sanctions.

Indeed, to all outwards appearances, Biden’s graduated-escalation policy is motivated largely by domestic American political considerations, especially regarding Russia’s energy sector. With U.S. inflation high and rising, economic pain at home is the last thing the White House wants, especially soaring oil and gas prices. Consumers feel the squeeze not only when they fill their gas tanks, but in their other purchases that require transporting good to stores or front porches, especially food.

A little history on sanctions and recent U.S. foreign policy. It says something about today’s Democratic Party that Woodrow Wilson’s views are too hard-line to contemplate. Wilson, amidst his prolonged reveries about the League of Nations, strongly advocated using economic sanctions in lieu of military force to resolve international disputes. He called sanctions “a peaceful, silent deadly remedy,” and “a hand upon the throat of the offending nation.” Too much for the Biden Administration.

America’s experience with sanctions has been mixed, and suggests several conditions for effectiveness. First, sanctions should be imposed swiftly and by surprise if possible, to prevent targets from taking precautionary or protective steps to mitigate the sanctions’ impact. That obviously did not happen with Russia, international sanctions having been threatened for months, and even if not known in precise detail, easily imaginable. If Russia is not prepared for the measures already imposed so far, the Kremlin is guilty of governance malpractice.

Second, sanctions should be as sweeping and comprehensive as possible, since no sanctions will be completely effective. Lesser measures produce lesser results. Phrases like “targeted sanctions” sound good in diplomatic communiques, but broad-gauge sanctions are far more likely to cause sustained pain. Even history’s most-extensive sanctions, the UN Security Council measures against Iraq after invading Kuwait, did not ultimately succeed in forcing Saddam Hussein out. Concern for second-order impacts of sanctions on America’s economy is warranted, but sanctions should maximize harm to the target, with other measures separately protecting the domestic economy. Dialing down sanctions to protect the sanction-imposer does far more to shield the target than Biden realizes.

Finally, sanctions should go for the jugular. With Russia, its very existence as a major threat relies on the revenues from its oil and gas production and exports. As some wags have said, it’s more a big gas station than a real national economy. Russian earnings from hydrocarbon sales internationally totaled 60% of its export revenues in 2019, and forty percent of its national-government budget. Russia’s dependence on oil and gas revenues has grown steadily over the last eight years.

The Biden Administration argues that blocking Russian hydrocarbon sales would not immediately damage Russia because of currency reserves accumulated in anticipation of just such sanctions. Of course, many more non-hydrocarbon sanctions are also required than currently announced, also hastening expending the reserves. The aggregate effect of more robust and comprehensive sanctions, including particularly oil-and-gas sanctions, would strangle Russia’s government and broader economy.

The Administration’s misguided graduated-escalation strategy and failure to strike Russia’s energy sector unfortunately reinforce one another, providing Putin a lifeline. Postponing any sanctions now, especially against energy, only sustains Moscow’s war machine. If Biden wants to keep U.S. hydrocarbon prices down for political reasons, he should consider the supply side: U.S. production increases, quickly available through already-existing horizontal-drilling and fracking infrastructure, could substantially mitigate price rises on American consumers.

Europeans may have a harder time, entirely through their own fault, and contrary to U.S. warnings dating to Ronald Reagan against depending on Russian energy sources 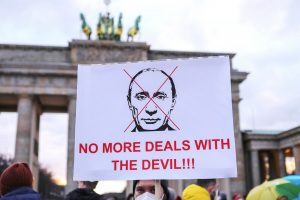 . And what better opportunity or higher motive for Germany and other governments to force their economies toward green energy than supporting the courageous Ukrainian people. No one is asking for unnecessary sacrifice, but no anti-aggression policy in Ukraine is cost free. That is the reality of a globalized economy. Otherwise, the West’s policy is simply, “we support Ukraine, but not when it is inconvenient.”