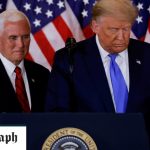 This article appeared in The Daily Telegraph on February 11th, 2022. Click here to view the original article.

‘President Trump is wrong.” With these words last Friday, former vice president Mike Pence drew an unambiguous red line in the fight for the Republican Party’s future. Although the battle began well before January 6 last year, when Pence rejected Trump’s direction to subvert the Constitution when counting the Electoral College’s vote, Pence’s steadfastness and clarity come at a critical moment.

As the conservative-libertarian Federalist Society was applauding Pence, the Republican National Committee tragically voted to censure Representatives Liz Cheney and Adam Kinzinger for participating in a House of Representatives committee investigating the January 6 riots. This self-inflicted wound evokes the remark attributed to the Marquis de Talleyrand: “It’s worse than a crime, it’s a mistake.”

Pence’s words mean inevitably that Republicans must choose sides between supporting Trump’s dangerous effort, in his own recent words, to “overturn the election,” or Pence’s adherence to the clear Constitutional text. Senate Republican leader Mitch McConnell’s sharp criticism of the Cheney-Kinzinger censure on Tuesday underlines the importance of Pence’s stance. This issue will now play out in two ways: constitutionally, as people align with either Trump’s view or Pence’s, between which there is no compromise; and politically, in the race for 2024’s Republican presidential nomination.6 sec

On the substance of the Constitutional issue, the merits are entirely with Pence. Neither the original Constitution nor the Twelfth Amendment give Congress or the vice president anything other than a clerical role. Pence said it eloquently on Friday: “I had no right to overturn the election. The presidency belongs to the American people and the American people alone. And frankly, there is no idea more un-American than the notion that any one person could choose the American President.”

No “constitutional conservative” can seriously argue the Framers intended Congress to do more than tabulate the respective States’ electoral certificates. The Framers wanted a system of separated powers, with President and Congress elected by different methods and constituencies, thus establishing the independence of government’s two elected branches. The Electoral College’s sole purpose is electing the President and Vice President; it was created precisely to exclude Congress from that function. And in America’s federal system, each State determines who its valid electors are, not Congress. Trump’s assertion that Congress has a larger role subverts the most fundamental premise of America’s national government. It is not a parliamentary system.

Politically, therefore, aligning with Pence or Trump is a flat, either-or choice. Pence, in the early maneuvering for what will blossom into a fully-fledged presidential campaign, has tried hard not to alienate Trump or his supporters. To maintain his own unquestioned integrity, however, he cannot bend on the correctness of his January 6 conduct. Party leaders and members were always going to have to choose sides, and that moment has arrived.

Moreover, other prospective Republican candidates, currently numbering between 15 and 20, must also now declare themselves one way or the other. In the campaign’s current “testing-the-waters” stage, most candidates are seeking the best of both worlds: separating themselves from Trump’s worst excesses without incurring Trump’s wrath. Good luck with that minuet.

Florida Governor Ron DeSantis, who does very well in public opinion polls even with Trump included as an alternative nominee, has consistently refused to state publicly that he will not seek the nomination if Trump runs. Former New Jersey Governor Chris Christie has already said he is in whatever Trump does. Maryland Governor Larry Hogan and Nebraska Senator Ben Sasse, who may run, will have no trouble aligning clearly with Pence.

By contrast, former Secretary of State Mike Pompeo, who has clung to Trump like a limpet, now faces his worst nightmare. Senators Marco Rubio, Ted Cruz, Josh Hawley, Rick Scott, and more now have the same dilemma. To exemplify the dangers in Trump-world, former South Carolina Governor Nikki Haley has said she won’t run if Trump does, but he nonetheless castigates her mercilessly for her inconsistencies (which will likely doom her campaign in any case).

Some commentators say the issue is philosophical, with more-conservative Republicans supporting Trump, while moderates oppose him. This is false. Donald Trump has no philosophy or policy other than Donald Trump’s greater glory. That is why the debate Pence has created is so important for the party’s future. It can either be a conservative party or a Trump party. It cannot be both. My bet is that philosophy, which ultimately brings electoral victory, will prevail.