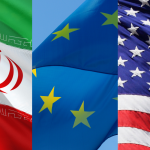 This article first appeared in the Wall Street Journal on July 20th, 2022. Click here to view the original article.

President Biden admitted last week that his long-suffering efforts to revive the 2015 Iran nuclear deal were finally nearing their end: “We’re waiting for their response. When that will come, I’m not certain. But we’re not going to wait forever.” Of course, we’ve been hearing this since December 2021, even from the Europeans, the deal’s most devoted acolytes.

The cascade of White House concessions during the negotiations, Iran’s additional time to advance its nuclear-weapons and ballistic-missile programs, and the loosening enforcement of U.S. sanctions, have considerably emboldened Tehran’s ayatollahs. While the current ambiguity is far from their ideal, they may well accept living with it indefinitely.

That should not, however, satisfy Washington. Instead, the U.S. should fashion diplomatic strategies to align the original deal’s other Western parties (France, Germany and the U.K.) with Israel and the Arab states most threatened by Iran. For two decades, America’s Middle Eastern and European allies have taken opposing views on how best to prevent Iran from obtaining deliverable nuclear weapons. This divide has sometimes been public, sometimes not, and preferred policies have shifted, but the Europeans have generally stressed negotiation while the regional allies have taken a tougher approach. Unsurprisingly, with the two most concerned groupings of American allies in disagreement, Iran has been able to traverse the disarray, coming ever closer to producing deliverable nuclear weapons. Fixing this problem is a top priority.

Since negotiations have failed repeatedly, Mr. Biden’s main diplomatic goal must be cajoling Europeans into adopting a harder economic and political stance, and accepting that clandestine military actions [BY WHOM?] against Iran’s [YES?] nuclear program have already begun. Even harsher measures may be necessary. If the Europeans share America’s view that a nuclear-capable Iran is unacceptable, they should be prepared to act on that belief.

An initial diplomatic step would be to have those most immediately endangered by Iran, both from its nuclear aspirations and as the world’s leading state sponsor of terrorism, take the lead with our European friends. One could imagine a delegation of, say, Israeli, Bahraini and Emirati foreign ministers visiting their European counterparts to urge a united front against Iran. What an impressive display that would make in Paris, Berlin and London. The tour could include Tallin and Warsaw to symbolize for other Europeans the dangers of living near hostile neighbors.

This joint Arab-Israeli flying squad would bring compelling arguments beyond the global threat of Iran’s pursuit of nuclear weapons. The White House has revealed that Iran is near to selling several hundred “attack-capable” drones to Russia, almost certainly to use in Ukraine. Sending drones to Russia is in keeping with Iran’s policy of supplying Yemen’s Houthi rebels with drones and missiles, which are often used to target civilian Saudi and Emirati airports and oil infrastructure.

Iran’s oil sales to China, evading U.S. sanctions weakened under Mr. Biden, have also increased dramatically. By contrast, the Bahraini and Emirati foreign ministers, on behalf of the hydrocarbon-producing Gulf Arabs, can be part of Europe’s solution to its catastrophic mistake of becoming overly dependent on Russian exports.

The traveling foreign ministers could also emphasize that the original deal never delivered the increased visibility into Iran’s nuclear program the world was promised. Instead, Tehran has ignored both its 2015 commitments and the International Atomic Energy Agency. Europe’s leaders, strong U.N. adherents, should be deeply disturbed by International Atomic Energy Agency Director General Rafael Grossi’s criticisms of Iranian obstructionism. The IAEA board of governors agreed overwhelmingly in June to censure Iran’s noncompliance, with only Russia and China voting against.

The diplomatic mission can also stress that Tehran’s intransigence over nonnuclear issues ultimately torpedoed revival of the 2015 agreement. Demanding that Washington de-list Iran’s Revolutionary Guards Corps as a foreign terrorist organization is completely unrelated to nuclear issues. Of course, the IRGC has threatened terrorism in Europe, such as the foiled 2018 attack on an opposition rally in Paris. Incredibly, Belgian legislators are now considering releasing the Iranian “diplomat” convicted of this bomb plot; perhaps Brussels should be the Middle Eastern flying squad’s first stop. Moreover, albeit under the flawed “universal jurisdiction” concept, Sweden recently convicted Iranian agents for prison murders shortly after the 1979 Islamic Revolution [WHAT’S THE CONNECTION??].

And, as for potentially using force against Iran’s nuclear efforts, who better than Israel’s current prime minister, Yair Lapid, to deliver the message? As he said during Mr. Biden’s visit: “The only way to stop them is to put a credible military threat on the table.” The Europeans should hear that from Mr. Lapid directly, one-on-one, in their capitals.

America’s counter-proliferation diplomacy on Iran will need to be much more extensive, accompanied by far-tougher economic sanctions and assistance to legitimate opposition groups to overthrow the ayatollahs. A joint Israeli-Arab, foreign-minister traveling team would be a good start.