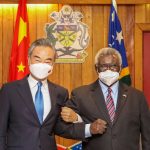 This article first appeared in the Washington Post on September 12th, 2022. Click here to read the original article.

Few areas of the world seem more distant from the United States than the island states of the South Pacific. World War II reminiscences have faded, and the words “South Pacific” now resonate more as a Broadway musical title than a geographic locator. For U.S. national security, this needs to change, sooner rather than later.

Get the maps out; Chinese leaders, diplomats and the military have theirs nearly memorized. Hemmed in by what it calls the “first island chain” (stretching from the Kuril Islands, through Japan, Taiwan, the Philippines and Indonesia), China has longed to break free into the broader Pacific Ocean. Beijing is interested in this wider horizon because its aspirations extend not merely to hegemony along its immediate Indo-Pacific periphery, but to far wider objectives, already reflected in its pursuit of economic interest in Africa and the Western Hemisphere.

Taiwan is thus important to China not just because of nationalistic fervor, but also because dominance over Taiwan would irretrievably pierce the first island chain. Another breakout strategy over the tyranny of geography is to leapfrog the close-in islands and stake out positions across the Pacific — which is precisely what Beijing appears now to be attempting.

The Pacific’s insular nations are small in land mass and lightly populated, although huge when their ocean territories are included. Xi Jinping has marked them as vulnerable, seemingly intent on going island-hopping, using intimidation, bribery or whatever it takes to achieve China’s ends.

The immediate crisis is in the Solomon Islands, where U.S. forces won a critical victory in 1942-1943 on Guadalcanal, a World War II turning point. In August, senior administration officials Wendy Sherman and Caroline Kennedy, whose fathers fought in the Solomon Islands, led a U.S. delegation to mark the 80th anniversary of the battle at Guadalcanal. Signifying growing Chinese hegemony, however, and perhaps issuing an insult at China’s behest, Solomon Islands Prime Minister Manasseh Sogavare failed to attend the ceremonies near Honiara, the capital. Weeks later, a U.S. Coast Guard vessel was denied permission to make a port call, another apparently intentional discourtesy. Most recently, elections scheduled for next May were postponed until 2024, a move that opposition leaders consider an ominous sign of China’s influence.

A Chinese base in the Solomons would directly menace Australia (about 1,200 miles away), harking back to the Japanese threat during World War II. I was recently in Sydney, and found that Australians need no persuading about China’s rising regional threat. What they seek is a more visible, vigorous U.S. presence in the region, and rightly so. The Solomons are in jeopardy now, and while “domino theory” inevitability might not yet obtain, other island states are clearly vulnerable.

America has for too long paid insufficient attention to the South Pacific. In 1945, the United States assumed Japan’s former League of Nations mandate over the new United Nations’ Trust Territory of the Pacific Islands. After plebiscites in 1983, one island chain became the Commonwealth of the Northern Marianas, thereby remaining part of the United States, adjacent to Guam, long a U.S. territory. Three other island groupings — Palau, the Republic of the Marshall Islands and the Federated States of Micronesia — chose independence. (American Samoa is a separate territory.)

These three new nations all signed “compacts of free association” with the United States, which provide that Washington supervises their foreign affairs (short of declaring war), including prohibiting the presence of foreign military forces without U.S. permission. The compacts have been extended once and are now up for renegotiation because they expire over the next two years.

This is not a moment to falter or for shortsightedness. Fortuitously timed as the renegotiation is, the White House should take full advantage of the opportunity to cement long-term strategic relations with this trio of nations to keep China out. The costs of enhanced U.S. involvement are trivial in the context of global aid budgets; and the sea and land expanses involved are only somewhat smaller than the continental United States itself.

When I briefed President Donald Trump just before his meeting with the three leaders of these freely associated states in 2019, he asked, “Why am I meeting these people?” His successors should not need to ask.

South Pacific responsibilities need not rest on the United States alone. Australia, New Zealand and Britain all have contemporary relationships and regional histories, dating back to naval coaling or whaling stations. France retains three extensive overseas territories (New Caledonia, French Polynesia, and Wallis and Fortuna), represented in France’s Parliament, and whose territory is deemed part of the European Union.

Countering Chinese aggressiveness in the South Pacific should be a matter of urgent bipartisan agreement and action, rare as they might be today. The faraway island of Bali Hai, celebrated in a certain musical, is closer than we thought.