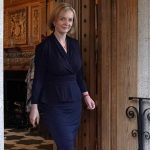 When there’s a leadership vacuum in Washington, a resolute Britain is crucial to Western interests.

As prime minister, an assertive Ms. Truss could be a force multiplier for the U.S. Boris Johnson, in his farewell to Parliament, advised colleagues to “stay close to the Americans.” These words are strange to American ears because we seldom hear them, even from our closest friends. But Mr. Johnson meant it, and there is no doubt Ms. Truss agrees. In the crises and conflicts ahead, her reward for pro-U.S. inclinations will be criticism that, like Tony Blair during the post 9/11 Iraq war, she is Washington’s “poodle.” Critics don’t grasp that Washington appreciates London’s unvarnished advice and candid criticism as proof of the alliance’s strength. Besides, I’ve never encountered a British poodle.

For America, bilaterally and globally, the transition from Mr. Johnson to Ms. Truss will likely be smooth. At a time when U.S. leadership is hesitant if not flatly wrong, such as in the tragic decision to withdraw from Afghanistan, British resolve is critical to sustain and advance Western interests.

Mr. Johnson bequeaths to Ms. Truss the essentially completed job of liberating the U.K. from the European Union, thus enabling her to focus on new priorities. As a former “Remainer,” Ms. Truss is, ironically, well-suited to the post-Brexit imperative of making a success of Britain’s new international reality. This requires abandoning a Eurocentric focus in economics, striving instead to expand British trade and commerce world-wide, and in politics advancing global British interests. While serving as Mr. Johnson’s trade secretary, seeking bilateral deals with the U.S. and other countries, Ms. Truss’s post-Brexit focus was marked by determination and perseverance. The philosophical direction of her policies seems clear.

The Ukraine war has proved that when it comes to defending continental peace and security, the U.K. can be a better “European” outside the EU than key EU members like France and Germany. While President Biden has stuttered in delineating clear objectives for the North Atlantic Treaty Organization and in delivering military assistance to Ukraine, Mr. Johnson’s government never wavered. Ms. Truss has spoken about ensuring that Vladimir Putin “loses in Ukraine” and suffers a “strategic defeat.” By contrast, Mr. Biden and his more timid advisers appear to be dragged along by Congress, more forward-leaning officials and events on the ground. Especially if Ms. Truss keeps Defense Secretary Ben Wallace in place, London is likely to remain resolute even if Washington continues to falter.

Finland’s and Sweden’s fortuitously timed moves to join NATO will make it easier to keep decision-making on defense and security within the alliance and resist France’s constant push to expand EU involvement in those realms. Ms. Truss will have no difficulty insisting that NATO is the epicenter of Western politico-military debates, rather than indulging the fanciful notion that the EU can or should be.

Because Ms. Truss is freed from EU parochialism, she appears up to confronting China’s aspirations for Indo-Pacific and then global hegemony. During the just-concluded Tory leadership campaign, she was reportedly ready to reopen Britain’s national-security strategy to declare China, like Russia, an “acute threat,” rather than merely a strategic competitor. As in America, bureaucratic resisters in key departments, such as Treasury and the Foreign Office, resist even acknowledging the struggle with China, but Ms. Truss has no illusions. Her leadership as foreign secretary in establishing the Aukus partnership to build nuclear submarines for Australia proves the point. During the campaign, Ms. Truss’s support from Sino- and Euro-realists like former party leader Iain Duncan Smith and Sir Bill Cash indicates that she is committed on the China issue.

Iran’s nuclear menace also remains a challenge to Britain and America. As a party to the 2015 nuclear deal, London has a key role, and there are signs Ms. Truss is more skeptical of the failed agreement than prior U.K. governments. Her vocal supporters certainly are. No longer part of the “EU-3” negotiating group with France and Germany, Britain can play a truly independent role. If Ms. Truss used the occasion of her first phone call as prime minister with Mr. Biden to urge that he scrap the deal and emphasize that all options are on the table, her government would be well-launched.

Margaret Thatcher’s 1979 selection as prime minister foreshadowed Ronald Reagan’s election as president. We can only hope for a reprise, and the sooner the better.