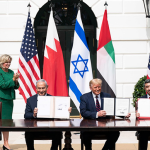 The first peace treaty Israel had with an Arab country came in 1979 with Egypt, the next in 1994 with Jordan. The next two, with the United Arab Emirates and Bahrain came today. Unlike the previous two, there is a palpable sense of momentum that will lead to more normalizing ties shortly. Missed in all the excitement was that another Muslim state, Kosovo, not only agreed last week to establish relations with Israel, but also to locate its embassy in Jerusalem.

Sadly, of all the European nations who kept lecturing the United States to spend more effort on bringing peace to the Middle East, only Hungary deigned to send a senior representative to this event. Equally significant was that despite all the euphoria in Washington, Abu Dhabi and Manama, in Jerusalem several left-wing politicians and their attending choir of protestors poured cold water on the festivities by lamenting the abandonment of the Palestinian issue. They were joined in their woe in Washington by several news commentators and the Speaker of the House Pelosi who dismissed the treaties as political distractions and complained that the Palestinian issue was unaddressed, as if the headline should be “Peace sets back chances of peace.” Two years ago, these voices all snarked that the move of the US embassy to Jerusalem effectively would end any chances for peace. Finally, Palestinian terror groups in Gaza registered their opinion and launched missiles into the Israeli city of Ashdod to coincide with the White House event.

At the core of the European diplomatic slight, the American establishment’s dismissiveness, and the symbolic but irrelevant launching of missiles was the belief that the Palestinian issue’s resolution is a precondition to advance regional peace. A video recently resurfaced of Secretary of State Kerry in 2016 shutting the door with decisive derision of anyone, especially Israeli leaders, who entertained even the remote possibility that a peace treaty with an Arab country was possible without a resolution of the Palestinian issue first.

And yet, four peace treaties reveal quite a different pattern. Indeed, Secretary Kerry failed not only to predict the future, but the past as well. In 1977, Egypt’s president, Anwar Sadat, was rattled to the core by President Carter’s initiative to convene an international peace conference in Basel Switzerland cosponsored by the Soviet Union – a nation Sadat had just spent years to expel. The Israelis betrayed their anxiety by joking at the time that all Israelis are Swiss since Zionism was born in Basel in 1897 and will die in Basel in 1977. Driven by the US misstep and converging strategic interests, Egypt reached out to make peace. Yes, the Palestinians were mentioned, and an attempt to involve them was included (the Autonomy Plan), but peace and strategic cooperation transcended their veto.

In 1994, the Oslo Accords terrified Jordan’s king. The PLO was an arch-rival and internal threat. Jordan had long coordinated quietly with Israel to manage this threat. The Oslo process threated to devastate this sensitive coordination, so to preempt this, Jordan signed a peace treaty to codify its continued stewardship over the Waqf (Muslim council governing the Temple Mount in Jerusalem) under Israeli control, and reinvigorated Israel’s commitment to coordinate with Jordan. Palestinian aspirations were acknowledged, but again, peace and strategic cooperation transcended their veto.

Since then, Israeli governments offered the Palestinians 98% of the disputed territories, including ceding Judaism’s holiest site, the Temple Mount, and froze settlements, even building in Jerusalem, to encourage the Palestinians back to the table – all for naught. The Palestinians refused to negotiate directly with Israel. Peace stalled because the PLO could not agree to acknowledge the legitimacy of Israel’s existence, yet held a veto over any progress. Periodically escalations followed, each more deadly than the last.

All along, Israel grew in population, wealth and strength. In 1990, Israel hovered at 4.5 million inhabitants, USD 59 billion in GDP, and an industrial era military still reeling from the Yom Kippur and Lebanon wars. It is now twice the size, and nearly ten times the GDP, with one of the most advanced high-tech militaries in the world dwarfing those on its borders combined. In short, the diplomatic reality – that Israel needed peace desperately, was weakened by its absence and that the resolution of the Palestinian issue was the bottom line — diverged starkly from the strategic realities on the ground. Israel was becoming a regional power of great value to those who shared its adversaries, leading to quiet cooperation under the table. In essence, Israel could afford not to have peace; its adversaries, however, could not and are in terminal decline as a result. And indeed, Israel could hardly afford many more attempts to make the sort of peace outlined in Olso in 1993, given the immense cost inflicted on Israel and the Palestinians of trying.

As with Egypt’s Sadat in 1977 and Jordan’s King Hussein in 1994, strategic changes over the last half decade drove a new round of peace. The Obama administration signed the Iran nuclear deal (JCPOA) and signaled the diminution of American power around which the security architecture of the Gulf, the Levant, the Arabian Peninsula, north Africa and southeast Asia were all built. The distress American moves caused convinced Gulf Arabs that their survival could no longer be held hostage to the Palestinians.

The Trump administration reinvigorated American pressure on Iran, and confidence grew again among allies that the United States once again appreciated the indispensability of its power. But it was inescapable that the United States was entering a period of internal upheaval, turning inward. The proclivity since World War II of Washington elites had been to demand of allies to yield to restraint, subordinate their bilateral relations, or “spokes,” to the hub of American intermediation, and submit to the lead of our diplomats. In return, we would carry the defense burden protection. The Trump administration upended this. We would ask more of our allies so we would need to do less, but also untether them to purse their interests with less deference to the Sisyphean quest of stability, but also in coordination with each other even without its passing through the hub of Washington.

The result was what we witness today: various regional nations realized they have to reach out to Israel and band together to pursue their interests, even survival. They could no longer afford the luxury of being held hostage to Palestinian vagaries. Once again Palestinian aspirations were acknowledged, but again, peace and strategic cooperation transcended their veto.

In short, the ceremonies in the White House today abandoned the attempt of decades to hold the region hostage pending the indulgence of Palestinian rejection and reverted to the strong foundations that had led to the first two peace treaties: namely, to codify already existing fundamental convergence of outlook and national interests, rather than seek to change realities on the ground through a detached utopian vision.

Indeed, it is likely that the Palestinians themselves – not leaders, but those who live in daily contact with Israel – are arriving at the same conclusion.