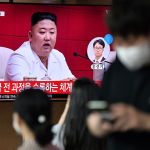 Beijing has long avoided paying any kind of price for its acquiescence to the Kim regime’s games.

For weeks, North Korea observers have speculated that Pyongyang was preparing an election surprise for the U.S., perhaps testing a submarine-launched intercontinental ballistic missile. So far there’s been no launch, but the strange shooting death this weekend of a South Korean official who might have been looking to enter the North by boat nonetheless highlights the hair trigger on which the Peninsula still rests.

While Donald Trump has pursued the bright lights and glitter of international “summits” with Kim Jong Un, Pyongyang has relentlessly improved and expanded its nuclear and ballistic-missile capabilities. After almost four years of U.S. showmanship—but insufficient, inconsistent economic and political pressure—it is clear as Nov. 3 approaches that North Korea has again outperformed an American administration. A fourth Trump-Kim encounter might still emerge as an “October surprise” to aid Mr. Trump’s flagging re-election campaign, but participating in such a circus would be an act of self-abasement for the president.

Keeping the world guessing about his intentions has allowed Mr. Kim to divert attention from conditions in the North. “We’re not seeing any sign of regime instability,” said Gen. Robert Abrams, commander of U.S. Forces Korea, on Sept. 10. But little is known about how North Korea has been affected by the coronavirus pandemic. Pyongyang claims to have successfully sealed off its long border with China, but for all anyone knows North Korea’s primitive medical system is on the verge of collapse.

Those days are gone. China should no longer be treated as part of the solution on the Korean Peninsula. Beijing is—and likely always was—part of the problem. Rather than helping to denuclearize North Korea, Beijing has been content to let the U.S. and Japan focus on that threat as a distraction from China’s own growing menace. It’s clear now that Beijing sees a nuclear-capable Pyongyang as a “wild card” useful for keeping the West off balance.

Whether in a second Trump term or a Biden administration, simply pursuing variations on existing policy themes is almost certain to fail. Instead, the U.S. should make China’s continuing acquiescence to Mr. Kim’s nuclear and ballistic-missile programs a priority of the bilateral agenda. Biological and chemical weapons must also be included, since another unfortunate consequence of the Covid-19 pandemic is the proof it offers of the novel coronavirus’s potential as a weapon. Not without reason have these threats long been called “the poor man’s nuke.”

Other countries should take the same approach, as well as deepen their mutual politico-military cooperation. Not that India, Japan or Australia needs much encouragement. Tokyo’s increased willingness to invest in its military stems from its fear of China, not North Korea.

Beijing’s economic lifeline keeps the Kim dynasty in power. China should pay a price for its acquiescence. Additional economic sanctions aren’t enough. It’s time to revive the Cold War concept of linkage and make North Korea an issue for negotiations across the board in Washington’s bilateral relations with Beijing. China has been employing a “whole of government” approach to international affairs, and so should the U.S., raising Pyongyang’s nuclear threats along with existing issues like trade, theft of intellectual property, industrial espionage, forced technology transfer, spying, territorial claims, arms control and military expansion. A linkage policy will require broad international support, and it won’t happen through the United Nations, where China’s Security Council veto would stop the most important measures.

North Korea hasn’t pursued nuclear weapons in a vacuum. China knows it, and it needs to understand that the U.S. knows it too.