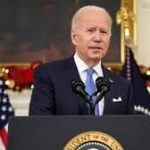 This article appeared in The Telegraph on December 29, 2021. Click here to view the original article.

As 2022 nears, Joe Biden and his party are in political trouble. Elected largely to restore pre-Trumpian normalcy, Biden campaigned as a safe pair of hands, promising effective Covid-19 programmes, a more-complete economic recovery, and a leader who could remain quiet at times. Pandemics, however, have no political favourites. Delta and omicron have Americans frustrated and irritable, economic recovery still feels inadequate, and we face 30-year-high inflation.

Biden’s presidency did not start from a position of strength. His Electoral College win rested on narrow margins in key states, the Democrats’ House of Representatives majority shrank markedly, and a 50-50 Senate came only after Trump criticised the November election’s integrity, thereby dissuading Republicans from voting and costing two Senate seats in runoffs.

While 2020 was thus not a wave election, Democratic “progressives” persuaded Biden otherwise. These forces pushed through massive economic stimulants (even above Trump’s stimulus spending), thereby fueling inflation. But progressives pressed for more and went too far; their latest multitrillion spending ideas will end 2021 gridlocked in Congress. House Democrats in large numbers, even in safe seats, are not seeking re-election in 2022, indicating pessimism about retaining a majority.

Worse, Biden’s approval ratings have tanked, dropping precipitously from roughly 8-10 per cent net positive to 8-10 per cent net negative. Significantly, Biden’s numbers went off the cliff this summer as the world watched America’s national humiliation caused by his withdrawal of US forces from Afghanistan. The withdrawal’s bungled execution was later compounded by Administration admissions that IS-K and al-Qaeda could be ready to launch terrorist attacks against the United States from Afghanistan in six to 12 months.

Biden’s approval dropped because of Afghanistan and stayed low over economic and Covid discontent. More bad news emerged in November’s gubernatorial elections in Virginia and New Jersey, both believed safely Democratic. Voter dissatisfaction on law and order and education generated a Republican victory in Virginia and a near miss in New Jersey. Predictions of large 2022 GOP gains in the House and securing a Senate majority are now realistic.

Biden’s political prospects will undoubtedly impact his foreign policy. While he might prefer focusing on domestic affairs to fulfil his 2020 campaign pledges, the broader world will not be so obliging. The Afghan withdrawal’s catastrophic consequences continue to reverberate in foreign capitals. Moscow and Beijing almost certainly see US weakness and inattention, thereby encouraging their aggressive ambitions in places like Ukraine and Taiwan, respectively. Leaders in Kiev and Taipei are correspondingly concerned that further distractions in Washington will leave them in jeopardy.

The immediate risk is that Biden will seek to buy himself time at least until after November’s Congressional elections. That could spell bad news for Ukraine and other “grey zone” countries proximate to Russia but outside NATO, as Moscow and the alliance prepare for January “security” talks. Ukraine is worried that Biden will make significant but seemingly minor (and poorly understood) concessions to pacify Putin. Here, Britain could play a major role in checking any Biden giveaways, working with NATO’s Eastern and Central European members.

In the Indo-Pacific, Biden has prioritised making climate change deals with China, gravely concerning Taiwan and the wider Indo-Pacific, as do intimations that China and Russia are coordinating their actions. Diplomatic boycotts of Beijing’s Winter Olympics, as announced by Washington and other governments, hardly constitute a strong statement on human rights issues, let alone geostrategic threats. National security concessions now to avoid complicating Biden’s domestic problems may attract a hard-pressed White House, but the longer-term effects will endanger America and its friends.

A pivotal impending test of this proposition turns on the failing Perm-Five-plus-one minuet with Iran to revive the 2015 nuclear deal. The deal has iconic significance for Biden and other Obama Administration alumni, who see it as their foreign-policy apotheosis. Perilously, they still don’t recognise that Iran’s key demand – allowing uranium enrichment to reactor-grade levels – is one concession too far, a key enabler for Tehran to develop nuclear weapons. Biden seems desperate to avoid “failure” in the talks. Britain, and even Germany and France, could help persuade the White House that this dangerous gambit has run its course.

Obviously, Britain’s Covid and economic problems resemble America’s, and parliamentary politics for Boris Johnson are far from serene. None the less, now liberated from the EU’s arduous and ineffective policy-making process, London can proceed boldly in its foreign policy, especially within NATO. If there is an acceptable solution for Ukraine, Belarus and the other “grey zone” countries, it will come from NATO, not the EU. And, as the Aukus partnership to provide Australia with nuclear-powered submarines proves, Britain’s role in the Indo-Pacific is also critical.

While America struggles along with Biden for three more years, the stage is set for a bigger UK role in safeguarding Western security.