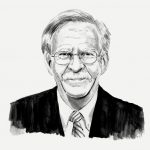 This article appeared in The Economist on February 28th, 2022. Click here to view the original article.

The West must not lapse back into complacency about potential aggressors, says a former US national security adviser

JUST DAYS into what might be a protracted Russia-Ukraine war, politicians and pundits are already drawing sweeping conclusions. For some, Russia’s failure to gain a swift, decisive, low-casualty victory renders Vladimir Putin’s downfall inevitable, and imminent. For others, a Russian victory, however bloody, directly threatens Ukraine’s neighbours and would mean sustained tensions in Europe. Which is correct, I can’t tell. Edmund Burke’s advice is, as usual, apt: “Please God, I will walk with caution, whenever I am not able clearly to see my way before me.” A few prudential lessons, however, are clear.  First, pay attention to what adversaries say. In 2005 Mr Putin said that the Soviet Union’s disintegration was the 20th century’s greatest geopolitical catastrophe. Slowly but systematically since then, he has sought to reverse the collapse, most visibly through invasions, annexations and creating independent states—in Georgia (2008) and Ukraine (2014). Mr Putin has also used less kinetic means to bring states like Belarus, Armenia and Kazakhstan into closer Russian orbits.  While this unfolded, the West remained largely insouciant: not spending adequate amounts on defence; growing increasingly reliant on Russian oil and gas supplies; and mirror-imaging Russia’s leadership as Europeans-in-waiting (ie, just like us except not as refined). Those days may be over, but Winston Churchill’s insight as to “the confirmed unteachability of mankind” remains profound. Been reading speeches by Xi Jinping, Ayatollah Khamenei and Kim Jong Un recently?  Second, the aggressive use of military force is back in style. The “rules-based international order” just took a direct hit, not that it was ever as sturdy as imagined in elite salons and academic cloisters. Although the steps taken to prevent Russia’s invasion and aid Ukraine in advance were obviously inadequate, the strength of the international reaction once the shooting actually started is impressive. It helps immeasurably that, so far, Ukraine’s resistance has been stiff. But let’s not be naive. Reports that Russian forces got lost, ran out of fuel, surrendered readily or even refused to cross into Ukraine all bespeak a Russian military not nearly so prepared, in morale or resources as Mr Putin believed.  The real unknown remains whether the widespread spontaneous outrage is sustainable, or whether the West lapses back into complacency regarding Russia and other potential international aggressors. World peace is not at hand. Rhetoric and virtue-signalling are no substitute for new strategic thinking and higher defence budgets. Germany’s commitment on February 27th to meet a commitment it had already made in 2014 to spend 2% of its GDP on defence merits applause. More will be merited when we see the colour of its money.  There has rightly been growing attention to the enormous threat China poses to Taiwan’s independence. So grave is it that Abe Shinzo, a former Japanese prime minister, and others have advised Washington to abandon “strategic ambiguity” over whether it will defend Taiwan against a Chinese attack. The Japanese now fully understand that an attack on Taiwan is an attack on Japan.  North Korea’s threat to South Korea is neither trivial nor a cold-war relic, especially in light of Pyongyang’s increasingly successful nuclear-weapons and ballistic-missile programmes. For Beijing, the prison-state North is an asset with which to threaten the western Pacific and beyond. South Korea’s impending presidential election will reveal much about the impact of Russia’s attack on Ukraine, and its implications for smaller countries abutting large, former-Communist, land empires.  In the Middle East, Iran proves that extremist, expansionist theology is still alive and well. Tehran’s hostile activities parallel Pyongyang’s nuclear and missile threats, and extend to providing drones and missiles to Yemen’s Houthi rebels to attack civilian targets in nearby countries; aiding terrorist outfits like Hamas and Hizbullah; and using conventional forces and terrorist tactics in Iraq and Syria to advance Iran’s interests.  Third, the new Russia-China entente is rolling along. Breast-beating about isolating Russia refers primarily to isolating it from Europe (which has, entirely through its own fault over several decades, become over-dependent on Russia for energy supplies). It remains to be seen whether the rest of the world will concur in the long run. Merely as one example, when Russia vetoed a UN Security Council resolution condemning the Ukraine invasion, India, China and the United Arab Emirates all abstained. China may well be providing Russia with a tacit insurance policy through a willingness to buy any oil and gas Europe decides to embargo (not that Europe has acted yet; it’s cold in Berlin).  More important is the strategic positioning of the Russia-China entente. Although not yet a full-scale alliance, the Beijing-Moscow relationship is something the West feared during cold-war days. Richard Nixon and Henry Kissinger were determined to “play the China card” to widen the gap between Beijing and Moscow that had been opening since Nikita Khrushchev launched de-Stalinisation. There is no doubt the entente has legs, after years in which the two countries’ interests have been converging. With both empires now showing their fangs, playing a new strategy “card” to split them will be difficult. The entente is likely to be a threatening reality for decades.  In sum, international threats are back with a vengeance. The critical unanswered question is whether the United States and the West generally can shake off their lassitude. ■  John Bolton was America’s national security adviser in 2018-19 for President Donald Trump. He was ambassador to the United Nations in 2005-06 and served in the administrations of presidents Ronald Reagan, George H. W. Bush and George W. Bush.