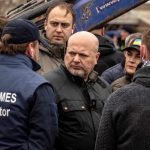 This article appeared in The Wall Street Journal on April 14th 2022. Click here to view the original article.

Harrowing images of slain Ukrainian civilians add to the evidence of Russian war crimes. While many Europeans favor hauling the perpetrators into the International Criminal Court, Washington has largely ignored the ICC since removing its signature from its foundational Rome Statute in 2002.

That may be changing. The Biden administration has made noises about cooperating with the ICC, and on March 3 a bipartisan group of senators introduced a resolution that “encourages member states to petition the ICC and the ICJ [International Court of Justice] to authorize any and all pending investigations into war crimes and crimes against humanity” committed by Russia.

Many Americans seem unaware that aiding the ICC has significant implications. The ICC is a fundamentally illegitimate assertion of power, thoroughly lawless in purportedly exercising jurisdiction over countries (and their individual citizens) not parties to the statute. The court and its prosecutor, who decides what cases to launch, aren’t part of any coherent governance structure and are under no restraining constitutional checks and balances or democratic controls. These and many other defects are unfixable, as I told Congress in 1998. ICC proponents say its 123 state parties govern the court, but this is laughable. The ICC governs itself. The prosecutor is selected by the court, which may not trouble Europeans but contravenes America’s separation of executive and judicial powers to protect liberty. It lacks jury trials, traditionally important to Americans.

The ICC’s existence, therefore, is potentially threatening. Fortunately, its record is negligible, largely because its pretensions to authority mirror those of the equally impotent ICJ. That neither has yet become dangerous to America’s democratic, constitutional sovereignty is cause for relief, not complacency.

European Union members seem fine with surrendering their sovereign powers to supranational bodies and appear ever ready to surrender ours as well. What they and others do is their business, but it shouldn’t be ours. The imperative some Americans now feel to “do something” risks putting the U.S. in the hypocritical position of invoking the ICC when it suits us, but not otherwise. We should continue ignoring the ICC because of its fundamental flaws from America’s perspective, and instead support sounder alternatives.

Ukraine provides an excellent test case. The crimes were committed there; the overwhelming mass of evidence is there; and Ukraine remains a viable state whose prosecutors have already begun their work. ICC supporters, for their own ideological reasons, say Ukrainian courts are biased and unable to administer evenhanded justice. Even some Ukrainians favor washing their hands of this burden. Nations don’t mature politically, however, by ducking responsibility, fearing they might be imperfect. Neither America nor Ukraine should succumb to these temptations. When national courts afford equal justice to all, they validate constitutional, democratic legitimacy and sovereignty. If colonial courts in 1770 could conduct fair trials of the Boston Massacre’s perpetrators, represented by John Adams no less, why should we assume today’s Ukrainian courts can’t also measure up?

ICC supporters say Ukrainian courts can render only mundane judgments, whereas Russian defendants should be charged with “war crimes” and “crimes against humanity”—offenses within the ICC’s jurisdiction. “Mundane” crimes like murder, rape, torture, arson and destruction of property are insufficiently condemnatory of Russia’s behavior, they say. This is a fundamentally political argument, revealing precisely why the ICC is in key respects a political and not a judicial body, devoid of effective constitutional or democratic control. Clear-eyed people world-wide can see and understand what Ukrainian courts will reveal. We need no schooling by Platonic Guardians in The Hague.

Even better would be a new Russia conducting criminal prosecutions. Vladimir Putin’s rule won’t last forever. How countries handle war crimes and human-rights abuses committed in their names is the truest test of, and the best way to achieve, real political maturity. Allowing a successor regime to shrug off moral responsibility for reckoning with the nation’s past is erroneous. Ceding authority to a distant international body is cowardice, not enhanced maturity.

Certainly, risk of mistake and failure is ever present, but without taking that risk, there is no easy national path back to trustworthiness and honor. Even worse, shirking enables future autocrats to assert that Russia was sold out by traitors and foreigners. Read “Mein Kampf” for the road map.

Especially if very few defendants come into Ukrainian custody, a new Russian government would have considerable work to do. Post-1989 regime change across the former Soviet bloc required successor authorities to confront their nations’ unsavory pasts. Some, such as former East Germany and Hungary, responded with prosecutions; others, such as Czechoslovakia, with procedures similar to the truth-and-reconciliation model South Africa followed after apartheid, or a mixture of approaches. The victors in 1945 began Germany’s de-Nazification, but elected German governments continued it.

Choosing the right judicial decision-maker isn’t an arcane jurisdictional issue, nor is it deferrable to the vague future. American leadership can significantly enhance Ukraine’s principled national sovereignty and remind Russians that their ultimate place in history is in their hands, not in a distant international court.