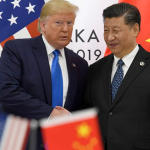 John Bolton says the president is not principled but transactional

This article appeared in The New York Daily News on July 28, 2020. Click here to view the original article.

As November’s election approaches, philosophical conservatives and Republican stalwarts alike increasingly find themselves in an uncomfortable position. They understand with growing clarity that Donald Trump does not share their philosophy (or any other) and is palpably failing at implementing his own signature policies, let alone guiding the wider government. Instead of acting on policy or principles, he concentrates essentially only on getting himself reelected.

Nonetheless, conservatives and Republicans fear that a Joe Biden presidency, combined with Democratic control of both houses of Congress, will pose grave dangers, especially given the left-wing’s raging fantasies. Trump’s best argument, therefore, is that he’s better than the alternative.

For an incumbent president, this is an astonishing admission of failure. But Trump’s fumbling of the coronavirus pandemic, which alone could sink his re-election, leaves him few options. Typically, therefore, he is trying to change the subject, hoping his faults will be overlooked compared to the dangers a Biden administration would pose.

What Trump omits, but which the rest of us must understand, is that on critical, indeed existential, issues facing America, he offers precious little to warrant another term.

Take China policy. In the administration’s first three years, Trump relentlessly pursued “the deal of the century” to solve America’s longstanding trade deficits with China. Whether China would ever renounce the trade imbalance’s underlying causes, such as massive theft of U.S. intellectual property, was questionable. Nonetheless, Trump wanted a deal.

Pursuing it, Trump sneered at concerns about Beijing’s belligerence in the South China Sea; its intentions to subjugate Taiwan; repression of the Uighurs; the shredding of China’s pledge to maintain Hong Kong’s separate status after the “handover” from Great Britain; and more.

Then came COVID-19. At first, Trump simply ignored Beijing’s culpability. China’s disinformation, concealment and willful misrepresentation went unanswered. Instead, Trump strove to keep the trade negotiations alive, rejecting any implication that the U.S. economy, his prized ticket to re-election, would suffer. On Jan. 24, for example, Trump tweeted cravenly: “China has been working very hard to contain the Coronavirus. The United States greatly appreciates their efforts and transparency. It will all work out well. In particular, on behalf of the American People, I want to thank President Xi!”

Six months later, Washington’s rhetoric against China is harshly critical on political, economic and social issues. Strong measures, from economic sanctions to closing China’s Houston consulate, have been taken. And the Trump campaign is working overtime to present Biden and his party as “soft on China.”

I am delighted by both the administration’s rhetoric and its actions against China. Too bad it all didn’t start in January 2017.

Don’t count on it lasting beyond Nov. 3 if Trump wins. His transactional, non-philosophical (indeed, anti-philosophical) approach to governing will almost certainly re-emerge. This has happened repeatedly, as with North Korea’s nuclear-weapons threat: from “fire and fury” rhetoric to three unprecedented, failed summits with Kim Jong Un, to no meetings at all. Can anyone doubt that this year’s “October surprise” might be a fourth Trump-Kim meeting?

With China, most of the recent anti-Beijing rhetoric has actually come from Trump’s subordinates. It can be easily thrown over the side, along with the Uighurs, Hong Kong and Taiwan. Sanctions and other punitive measures can be jettisoned just as tariffs and massive civil and criminal penalties against Huawei and ZTE and Chinese belligerence along its periphery were ignored. A congratulatory call from Xi Jinping would provide the perfect pivot for Trump to urge resuming trade negotiations for “the deal of the century.” We’ll be back on the Trump Train, not planning U.S. grand strategy.

Indeed, if Trump prevails, right-of-center political pressure on his China policy will need to be strong and unrelenting. So too if Biden wins, which shows how little Trump has to offer here. Conservatives, Republicans and independents can legitimately reject Trump, however unhappy they are with Biden. Far better to face the perils of opposition than to risk irreversibly tarnishing the philosophy of conservatism and its party with Trump’s brand.