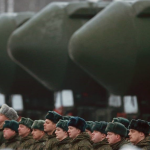 This article appeared in 19FortyFive on February 27th, 2022. Click here to view the original article.

Perhaps because Russia’s invasion of Ukraine has not gone nearly as quickly or decisively as he expected, Vladimir Putin is now trying to raise the stakes. Or at least pulse rates and blood pressures among skittish Western elites. His Sunday announcement that he had ordered Moscow’s nuclear deterrent forces to high alert produced all the publicity he must have expected, at home and abroad.

The actual operational consequences of the announcement remain unclear, but whether it is something more than information statecraft is doubtful. Overreacting or underreacting would give Putin more than he deserves.

For the Kremlin, this is an unusually late salvo in the Ukraine propaganda battle that Russia has been losing badly. Since launching the invasion Thursday, official pronouncements from Moscow have been very few, and mostly innocuous at that. In stunning contrast, Ukrainian officials, at the national and local levels, have been prolific disseminators of information, in traditional and social media.  Western media reporting on Ukraine have amplified this information with videos, photos, and interviews with private Ukrainian citizens and soldiers, facilitating widespread dissemination of every piece of good news. There have even been media coverage adverse from around Russia, behind the lines, which Moscow has had mixed success in suppressing.

As in any propaganda war, the veracity of much of what is being said is still open to question, e.g., whether the Ukrainians on Snake Island were killed as Kyiv claimed, or taken prisoner as Moscow now says, after their iconic response to Russian admonitions to surrender. Winston Churchill rightly said that “[I]n wartime, truth is so precious that she should always be attended by a bodyguard of lies.” No one should be surprised if Ukraine isn’t well aware of that unpleasant but very omnipresent necessity.

By playing the nuclear card in Russia’s information-warfare deck, Putin aims to achieve two goals. First, he is appealing to his fellow citizens, continuing efforts to persuade them he simply had no choice but to invade Ukraine, largely because of NATO threats and historical grievances dating to World War II. That propaganda campaign inside Russia has not gone well, and Putin could readily have concluded he needed something more sensational to get people’s attention and rally them around his flag.  And it couldn’t hurt the morale of Russian troops already in combat in Ukraine to know that Putin was showing their ace of spades as a backup. Whether this gambit works domestically or not is a different matter.

Putin’s real audience, however, was almost certainly political leaders in America and Europe that he considers week-kneed. Critical to producing the desired propaganda effect in foreign countries is the well-known reality that Russian military doctrine explicitly contemplates the first use of nuclear weapons, emphatically so at the tactical or battlefield level. Those in the West predisposed to assume the fetal position at the mere mention of nuclear weapons, and their numbers are substantial, are likely Putin’s main target. How well he succeeds, we shall soon see.

There must be no wavering in NATO’s continued urgent supply of weapons and other assistance to Ukraine’s government. There is nothing negotiable here with Russia, including at the possible peace talks coming soon at some point on the Ukraine-Belarus border. If the United States demonstrates any hesitation here, it will only ignite even more jitters in Europe, where displays of fortitude in the Ukraine crisis have been higher than expected, so far.

There remains the possibility that Putin is actually deadly serious about the imminent use of Russian nuclear capabilities in the Ukraine theater. Perhaps things are actually going even worse for Russia than already reported in Western media. Putin could worry that a coming military debacle would suffice to have him removed from power, and perhaps even collapse the entire regime he and his cohorts have created. In such a desperate situation, using nuclear weapons would create an entirely new scenario. Putin could assign blame to others for Russia’s conventional military failures, and use the radical uncertainty of the first wartime use of nuclear weapons since 1945 to cling to power.

This scenario is unlikely, but obviously deeply concerning. To date, the Biden administration has flooded the airwaves with intelligence information about the Kremlin’s capabilities and plans before Putin’s invasion began, unfortunately to no deterrent effect, and perhaps too promiscuously. If, however, there is ever a moment to use intelligence declassification in an information warfare effort, this is it.

In the meantime, we have much to be done both in Ukraine and elsewhere in the world where our adversaries may try to take advantage of the priority we are rightly according to Ukraine. Putin’s nuclear threat needs to be assessed seriously but not reflexively.

Ambassador John R. Bolton served as national security adviser under President Donald J. Trump. He is the author of “The Room Where It Happened: A White House Memoir.”