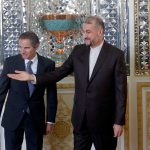 This article appeared in The Washington Post on March 22nd, 2022. Click here to view the original article.

Blind faith, laced with willful ignorance, seasoned by arrogance, is not a formula for success, as the Biden administration will soon discover. After a year of humiliating American concessions — including preemptive sanctions relief — to the planet’s most egregious terrorist state, the 2015 Iran nuclear deal is rising from the dead. This appeasement will delight Iran, encourage North Korea, gratify China and Russia, appall Israel and our Arab allies, and endanger the United States and the world.

Throughout the negotiations, few administration officials knew key details, and outsiders only broad outlines. This secrecy wouldn’t have been to deny adversaries sensitive information, since Iran knew what President Biden’s team proposed to surrender, but to keep its full extent from the U.S. public. Fear of an incandescent political reaction against the agreement was well-grounded; it will erupt shortly, with the announcement of a deal reportedly imminent. At that moment, the Senate must assert its constitutional rights on treaty-making.

The original 2015 deal was fatally flawed. It ignored clear evidence Iran has always lied about its nuclear-weapons goals, buttressed later by overwhelming data from Israel’s stunning 2018 raid on Tehran. It fantasized away Iran’s continuing strategic intention to obtain nuclear weapons, a deathblow to any real chance to eliminate nuclear-proliferation threats. Pre-deal negotiations never established a baseline of Iran’s prior weaponization efforts, and its verification provisions have been repeatedly exposed as inadequate.

Most dangerously, Iran received better treatment than U.S. friends and allies, who must typically renounce uranium enrichment to receive licenses of American technology for civil purposes. By allowing Iran to enrich uranium to reactor-grade levels, it is plain physics that Iran was thereby enabled to do 70 percent of the work required to enrich to weapons-grade levels.

Assertions about reducing “breakout time” for Iran were childishly inadequate, only pretending that the United States possessed critical information about the actual numbers and sophistication of Iran’s centrifuge cascades. Beyond these flaws, of course, were Iran’s repeated violations, exacerbating the deal’s deficiencies.

As specifics emerge about the renewed agreement, the picture will inexorably worsen. One particularly menacing aspect is the concept of “inherent guarantees” reported by Reuters in February. Tehran demanded assurances that no future U.S. president would withdraw from the deal, a concession that would be both unconstitutional and potentially suicidal. Instead, Reuters reported, Iran was placated by U.S. assurance of “inherent guarantees,” a chilling phrase on which the coming debate could turn.

To the extent that Biden attempts to constrain his successors, to Iran’s benefit, he risks his presidency. Handcuffing future presidents to Iran’s advantage would be unprecedented, and dangerously so, in the history of American treaty-making. This is not simply a disagreement about the merits of one aspect of the deal, or the deal itself, but about how much a myopic White House is willing to endanger the United States simply to finalize a deal. If Biden is serious about preventing a nuclear Iran, the threat of another U.S. withdrawal from the nuclear deal provides a powerful, entirely credible deterrent of Iranian temptations to once again subvert the deal.

With the new deal essentially done, constitutional issues also arise in deciding its proper status. Under any coherent reading of the Constitution’s Article II treaty clause, Biden should submit this measure to the Senate as a proposed treaty to see if “two-thirds of the Senators present concur.”

The Senate has watched and even enabled the erosion of its ratification power for decades, but nothing will stop or reverse that erosion unless senators decide to fight for the Framers’ intentions. The Iran nuclear agreement, especially in light of the “inherent guarantees” issue, is the perfect target to vindicate the Senate’s constitutional responsibilities.

By not sending the deal to the Senate, Biden would flout its treaty role. If that happens, the Senate should use its constitutional power to withhold advice and consent on all presidential nominees, both executive and judicial, until Biden changes his mind.

Such a move by the Senate would focus attention on substantive flaws in the resurrected nuclear deal and their dangers for future presidents and the country generally. Article II’s supermajority requirement for treaty-making reflects the Framers’ firm belief that treaties are exceptional steps for the United States, very different from ordinary legislation.

The tone of this debate need not be partisan, although in today’s Washington that is far from likely. The Senate may be 50-50, but Republicans should seize the moment; perhaps there is at least one Democrat who cares enough about the treaty clause to force the administration to send over the Iran nuclear deal for a vote. This is a matter of statesmanship, not politics.