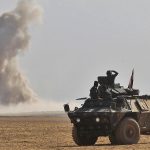 A history of the struggle to defeat Islamic State in Iraq casts a cold light on America’s strategic decisions in the region.

This article first appeared in the Wall Street Journal on June 10th 2022. Click here to view the original article.

In what may be the final volume of a tetralogy covering U.S. activity in and around Iraq over the past three decades, Michael Gordon’s “Degrade and Destroy” combines Washington decision-making with battlefield reporting in ways that few other writers can manage. This account of America’s war against the Islamic State is Mr. Gordon’s first without co-author Bernard Trainor, who died in 2018, but it equals its forerunners in quality. While daily press reporting strains to draw overbroad conclusions from insufficient data, Mr. Gordon maximizes history and minimizes judgments. He presents his analysis, of course, but it’s always moored in reality.

“Degrade and Destroy” is bracketed by two colossal presidential mistakes a decade apart: Barack Obama’s 2011 decision to withdraw all U.S. forces from Iraq and Joe Biden’s 2021 decision to do likewise in Afghanistan. They are proof, if proof were needed, of what Winston Churchill called “the confirmed unteachability of mankind.”

The unteachability starts with Mr. Obama, who told Mr. Gordon in 2007 that his personal engagement with Iran and Syria, coupled with America’s withdrawal from the region, would mean that “all these parties have an interest in figuring out: How do we adjust in a way that stabilizes the situation.” Mr. Gordon sees this view as “more of a projection of Washington’s hopes than a reflection of the hard realities in the region.” Mr. Obama’s words expressed his visceral opinion that America’s presence was the real problem—not the region’s long-standing animosities.

Mr. Obama confidently announced the withdrawal of U.S. forces in 2011, saying that “the tide of war is receding.” Unhappily, no one told ISIS, which launched its war shortly thereafter, or Iran, which had never given up its war against the U.S. Mr. Obama remained unteachable asserting in 2014 that if Iran would “operate in a responsible fashion”—that is, if the regime would stop funding terrorists, stirring sectarian discontent and developing nuclear weapons—we might begin to “see an equilibrium developing between” Sunni and Shia. That same year he said “it’s time to turn the page” on the wars in Afghanistan and Iraq, adding arrogantly: “This is how wars end in the 21st century.” In 2017, he called on U.S. allies like Saudi Arabia “to find an effective way to share the neighborhood and institute some sort of cold peace” with Iran.

Mr. Obama’s deeply flawed views shaped policy toward the ISIS threat even as he tried to conceal his intentions. Thus in 2011, while advisers urged keeping at least a small U.S. force in Iraq, Mr. Obama insisted that extending the existing status of forces agreement, or SOFA, be approved by Iraq’s parliament—a political impossibility. He then used the inevitable failure to necessitate total withdrawal. Adm. Michael Mullen, the chairman of the Joint Chiefs of Staff, thought the White House was just going through the motions. “It was pretty obvious to me that their [troop] number was zero,” Mr. Mullen said of the administration. Retaining U.S. forces in Iraq would have given Washington “an earlier heads-up” on ISIS’s rise, as Mr. Gordon puts it, perhaps averting the subsequent war against the caliphate or at least reducing its scope. When things went wrong after the withdrawal, Mr. Obama fell to “blaming the military for chaos that had unfolded following . . . the decision to exit Iraq.”

When ISIS seized Mosul in 2014, not only did Mr. Obama “have a new crisis on his hands,” Mr. Gordon explains, “but his paradigm for ending the ‘forever wars’ had collapsed.” America was coming back to Iraq. Such was Mr. Obama’s plasticity, however, that returning U.S. troops were protected by a SOFA not approved by Iraq’s parliament—precisely what he had rejected in 2011. His administration hoped that “the media would not ask too many questions.”

Mr. Gordon makes quite clear how much of Mr. Obama’s 2011-14 blindness stemmed from his focus on Iran, specifically negotiating the 2015 nuclear deal. His anti-ISIS strategy was directly tied to Iraqi Shia militia groups under Tehran’s control, resulting in close encounters with the likes of Quds Force commander Qassem Soleimani, now deceased. Mr. Obama repeatedly accepted risks that benefitted Iran, or he probed for closer coordination or joint action with the regime and its surrogates, blissfully unaware that Iran was already fighting the next, post-ISIS war against the U.S. and its allies to establish dominance across the Middle East. Mr. Obama was determined that degrading ISIS would not disturb closer relations with Iran. Mr. Biden follows this illusion today, seeking to revive the Iran nuclear deal.

Mr. Obama focused on public opinion rather than strategy and leadership, “the tail wagging the dog,” as Mr. Gordon and Bernard Trainor previously described it. (Mr. Biden does the same now.) Mr. Gordon writes that the pattern was persistent: “The White House was not trying to wage a war as much as manage one.” Mr. Obama invariably justified his actions “in the narrowest possible terms” or, fearing a negative public reaction, tried to reassure Americans “that the military’s intervention would be virtually cost-free.” The November 2015 terrorist attack on the Bataclan theater in Paris chilled Mr. Obama because it shredded his foundational misperception that ISIS was a “jayvee” terrorist group, not as threatening as core al Qaeda. He worried that further attacks would reaffirm the idea that the threat of terrorism persisted and that it would imperil his domestic agenda.

Mr. Obama’s reaction was the antithesis of leadership and exhibited disdain for his fellow citizens. When the threat is sufficiently grave, and the leader candid and persuasive, Americans rise to the occasion. It is a self-fulfilling prophecy to say that they are tired of “forever wars” when their leaders never explain the threats and justify the necessary responses in the first place. Mr. Obama achieved the opposite of his stated intentions, not only failing to “end the endless wars” but working overtime to lull voters into the misapprehension that there were no longer real threats in the Middle East.

Donald Trump elaborated Mr. Obama’s mistake. Mr. Biden compounded the errors of both in Afghanistan, saying that “we’ve turned the page,” even though his appointees later explained that America would soon again be under threat of terrorist attacks launched from Afghan territory.

Whether Mr. Gordon will have a fifth volume to write may depend on whether Mr. Biden revives the 2015 Iran nuclear deal. Since 1991, U.S. military interventions in the Middle East have reversed Iraq’s invasion and occupation of Kuwait; overthrown Saddam Hussein, thereby terminating his pursuit of weapons of mass destruction and attacks on neighbors; eliminated the ISIS territorial caliphate and degraded but did not destroy ISIS itself; protected Israel and our Arab allies; crushed the Taliban in Afghanistan and decimated al Qaeda, until we gratuitously allowed their return to power and Afghan sanctuaries; and had a decidedly mixed and incomplete record on countering Iran’s manifold threats.

We could have done better, but it’s good to remember U.S. accomplishments—as Mr. Gordon has done here and elsewhere—if for no other reason than to prepare ourselves to deal with a growing list of threats around the world. The lesson of the Obama years, in any case, appears clear: Constantly underestimating both our adversaries and the capacity of the American people to rise to their own defense is a losing proposition.

Mr. Bolton, a former U.S. ambassador to the United Nations, served as national security adviser from April 2018 to September 2019.