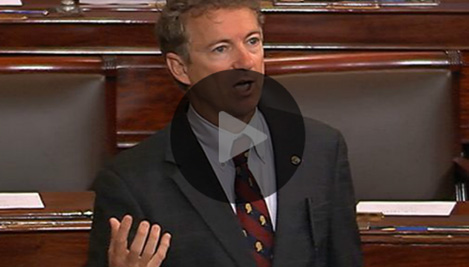 “He’s flatly wrong, and I don’t think he’d recognize the framers of the Constitution if he ran into them in the hallway.

“The issue here is not any kind of NSA surveillance of individuals — not listening to your conversations, not reading your emails, not shadowing you on the street, or not even taking your records. The records at issue here are the record of the phone companies. They are no different than the records of your bank, your department store, or any other variety of other things you purchase services from.

“Whenever the NSA wants to focus specifically on an individual, they must get a 4th Amendment compliant judicial warrant, which they do.”

“That’s part of the trouble with this debate. It’s filled with so much hype and hoorah, and in some cases outright McCarthyism, that’s it’s been hard for the defenders of the Patriot Act to make their case. That’s why I think we’re in the situation we’re in today.” 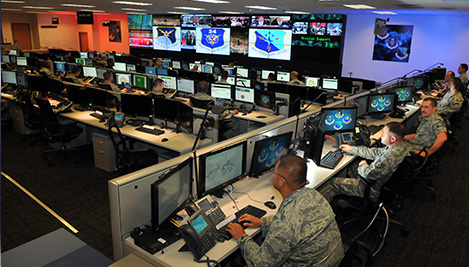 “Giving the implication that Americans are having the NSA listen to their phone calls, read their e-mails, the information’s presented in such a confusing and confused way, that I think there is a lot of demagoguery going on here.

“And I think that’s one reason why the votes in Congress are so up in the air. Because even many members don’t fully appreciate how this program works, what it does, and what protections are built into it.” 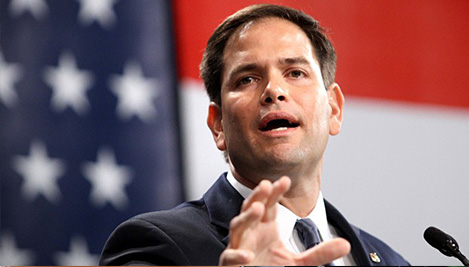 In a new opinion piece, Sen. Marco Rubio of Florida is defending the NSA’s phone-snooping program that a federal panel recently ruled is not authorized under the post-9/11 Patriot Act, saying the program remains essential to the country’s security.

The government’s bulk metadata collection includes phone numbers, the time and duration of calls — and nothing else, Mr. Rubio wrote in USA Today.

“The government is not listening to your phone calls or recording them unless you are a terrorist or talking to a terrorist outside the United States,” Mr. Rubio wrote. “There is not a single documented case of abuse of this program. Internet search providers, Internet-based email accounts, credit card companies and membership discount cards used at the grocery store all collect far more personal information on Americans than the bulk metadata program.”

He said the program has been found legal and constitutional many times by the secret Foreign Intelligence Surveillance Court. Mr. Rubio cited FBI Director James Comey’s recently warning that potentially thousands of terrorist sympathizers in the United States are being self-radicalized online by associates of the Islamic State terrorist group, urging them to conduct attacks on Americans inside the United States.

“Given these threats, now is not the time to end this program, which remains essential to our security,” Mr. Rubio wrote. “Congress has until the end of May to act before the current authorities expire. We must renew these authorities and provide those we charge with protecting us every tool they need to do so.”

Many Republicans, including other 2016 presidential contenders and possible contenders, are split on the NSA program. Former Florida Gov. Jeb Bush has said the “best part” of the Obama administration is the continuance of such programs, while Sens. Rand Paul of Kentucky and Ted Cruz of Texas both hailed the federal panel’s recent ruling.

Senator Rand Paul was exultant yesterday when a federal appeals court ruled the Patriot Act didn’t authorize the National Security Agency’s collection of phone records. The decision is a victory for both the libertarian extremist wing of the Republican Party as well as the far left that has cheered, as Paul has done, the massive betrayal of official secrets by Edward Snowden. The decision, which will be appealed to the U.S. Supreme Court, was made on a legalistic point about the language of the Patriot Act rather than a more sweeping one that could have decried the metadata collection as an infringement of the constitutional rights of citizens whose records have been collected. But the verdict certainly bolsters Paul’s view that the government overstepped its authority. However, if the senator thinks this will give his presidential candidacy a much-needed shot in the arm, he’s probably mistaken. Coming as it did after a failed attack in Texas and in the wake of the rise of a terror threat from ISIS that may be as potent as that of al Qaeda, aligning himself with Bernie Sanders on national security issues is not going to be winning formula in GOP primaries for Paul.

Paul still believes he has tapped into a vast reservoir of voter suspicion of government among conservatives. He’s right in the sense that President Obama’s policies and other administration hijinks such as the IRS scandal have inspired more cynicism on the right about big government. Seen from that perspective, the ruling not only vindicates Paul’s views about the way the intelligence community gathers information about terrorism but it might also make him seem less like the fringe candidate that his father was and more like a potential national leader. But the problem for Paul is that, the court decision notwithstanding, the isolationist moment in American politics is over.

In 2013, the terrorist threat that animated so much of the conversation about foreign policy and security since 9/11 seemed to be very much in the country’s rear view mirror. Many believed President Obama’s talk about Osama bin Laden’s death heralding the end of al Qaeda. And many were also prepared to think that much of what the government had done to prevent another mass terror attack on the homeland was either no longer necessary or more a function of a desire by the administration to amass Orwellian powers over the citizenry than to defend them. Not everyone took Paul’s over-the-top rhetoric about drone attacks being used against U.S. citizens sitting in a Starbucks seriously. But since a lot of Republicans were willing to believe Obama and former Attorney General Eric Holder capable of all sorts of law breaking — a state of affairs for which administration’s actions rather than the paranoia of the right are responsible — Paul’s star rose.

But if Paul has fallen back into the pack of 2016 hopefuls it’s not only because his brittle personality rubs a lot of voters the wrong way. Two years after his brilliant drone policy filibuster, Paul finds himself swimming upstream in a time of concern about Obama’s foreign policy disasters. Though the hard left in the form of Sanders and the rest of the Edward Snowden fan club still agrees with the senator on scaling back efforts to stop the terrorists, Paul’s legalistic approach to counter terrorism is out of step with the times and the needs of the nation.

More to the point, as our Max Boot pointed out yesterday, the court was flat out wrong about both the need for the metadata collection and about the theoretical threat that it supposedly poses to civil liberties. It is to be hoped the Supreme Court will reverse this decision. But in the meantime, the court ruling puts Paul on the wrong side of a debate in the Senate about the need to reauthorize the Patriot Act. Rather than wrong-footing Paul’s opponents, the court has only made those, like Senator Marco Rubio, who denounced the decision on the floor of the Senate, appear more in touch with the sensibilities of a Republican Party which is still dominated more by those who care about national security than those who fear the government is listening to their phone calls.

After working so hard to appear more like a foreign policy “realist” than a neo-isolationist (or a full-flown isolationist extremist like his father Ron), Paul now finds himself aligned with Bernie Sanders against the mainstream of his party. Instead of helping him, the appeals court has reminded Republicans that the senator really is to the left of Barack Obama on foreign policy. That is the comfort zone for the libertarian shock troops that helped Ron Paul win a number of GOP caucuses in 2012. But it is no way to win the Republican nomination in 2016.

Congress is poised to decide whether to re-authorize programs run by the National Security Agency that assess patterns of domestic and international telephone calls and emails to uncover linkages with known terrorists. These NSA activities, initiated after al-Qaeda’s deadly 9/11 attacks, have played a vital role in protecting America and our citizens around the world from the still-metastasizing terrorist threat.

The NSA programs do not involve listening to or reading conversations, but rather seek to detect communications networks. If patterns are found, and more detailed investigation seems warranted, then NSA or other federal authorities, consistent with the Fourth Amendment’s prohibition against unreasonable searches and seizures, must obtain judicial approval for?more specific investigations. Indeed, even the collection of the so-called metadata is surrounded by procedural protections to prevent spying on U.S. citizens.

Nonetheless, critics from the right and left have attacked the NSA for infringing on the legitimate expectations of privacy Americans enjoy under our Constitution. Unfortunately, many of these critics have absolutely no idea what they are talking about; they are engaging in classic McCarthyite tactics, hoping to score political points with a public justifiably worried about the abuses of power characteristic of the Obama administration. Other critics, following Vietnam-era antipathies to America’s intelligence community, have never reconciled themselves to the need for robust clandestine capabilities. Still others yearn for simpler times, embodying Secretary of State Henry Stimson’s famous comment that “gentlemen don’t read each others’ mail.”

The ill-informed nature of the debate has facilitated scare-mongering, with one wild accusation about NSA’s activities after another being launched before the mundane reality catches up. And there is an important asymmetry at work here as well. The critics can say whatever their imaginations conjure up, but NSA and its defenders are significantly limited in how they can respond. By definition, the programs’ success rests on the secrecy fundamental to all intelligence activities. Frequently, therefore, explaining what is not happening could well reveal information about NSA’s methods and capabilities that terrorists and others, in turn, could use to stymie future detection efforts.

After six years of President Obama, however, trust in government is in short supply. It is more than a little ironic that Obama finds himself defending the NSA (albeit with obvious hesitancy and discomfort), since his approach to foreign and defense issues has consistently reflected near-total indifference, except when he has no alternative to confronting challenges to our security. Yet if harsh international realities can penetrate even Obama’s White House, that alone is evidence of the seriousness of the threats America faces.

In fact, just in the year since Congress last considered the NSA programs, the global terrorist threat has dramatically increased. ISIS is carving out an entirely new state from what used to be Syria and Iraq, which no longer exist within the borders created from the former Ottoman Empire after World War I. In already-chaotic Libya, ISIS has grown rapidly, eclipsing al-Qaeda there and across the region as the largest terrorist threat. Boko Haram is expanding beyond Nigeria, declaring its own caliphate, even while pledging allegiance to ISIS. Yemen has descended into chaos, following Libya’s pattern, and Iran has expanded support for the terrorist Houthi coalition. Afghanistan is likely to fall back under Taliban control if, as Obama continually reaffirms, he withdraws all American troops before the end of 2016.

This is not the time to cripple our intelligence-gathering capabilities against the rising terrorist threat. Congress should unquestionably reauthorize the NSA programs, but only for three years. That would take us into a new presidency, hopefully one that inspires more confidence, where a calmer, more sensible debate can take place.